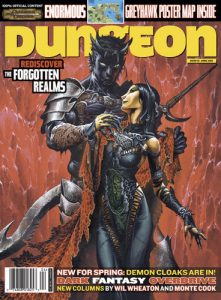 This is a journey through a swamp and small 27 room ruined castle exploration. It’s a fetch quest, to retrieve a cloak. The wilderness portion is through a dreadful swamp-like environment, during a cold spell. Both it and the castle are more evocative than the usual Dungeon Magazine dreck. The ruined castle has weak walls & floors, flooded areas, some open/balcony areas, and a rival NPC party. This suffers from the usual “DM word bloat” but “ruined castle in a chilly swamp” is a pretty classic trope and executed ok in this one. The chilly elements could be brought out a little more, the read-aloud is a little dull (but generally short) and the DM text is way too long. But you do get some good imagery in this one. That’s not a recommendation, unless you’re desperate.

The Styles
By Richard Pett
Level 9

Meh. The party is hired to look in to a guy who was framed as being a serial killer. The trail leads to a warehouse, and then a water temple and water worship area. The adventure pays lip service to multiple motivations, allowing hooks for the party to be hired or be do-gooders, a nice nod to assisting the DM even if they are more than a little bland. Likewise it addresses burning down a warehouse, just as G1 addressed burning down the Steading … always a nice addition where PC parties are concerned. It tries to provide an atmospheric setting but it engages in telling instead of showing. The city quarter is depressing. Great. What’s that mean? Contrast that with Deep Carbon’s SHOWING you WHY the place is depressing. It also engages in the practice of mixing important clues/facts in to walls of text during the investigation portion, and makes the jump that the party will follow-up on the Tharizdun cult (parts three & four of the adventure) after fulfilling their hook obligations in parts one and two. The concepts here had potential but execution is WAY off.

Secrets of the Arch Wood
By Skip WIlliams
Level 13