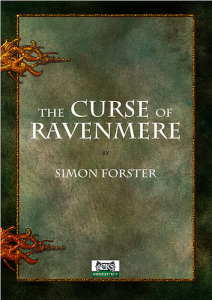 Ravenmere is a small village situated between the market towns of Appleby and Cricklewood, and once supplied both with cattle and the odd sheep. Today the village has been isolated by the local lord, for a plague has come to Ravenmere and all of its villagers are dead by their own hands. What will bold aventurers discover in the isolated village?

This twelve page and twelve location adventure locale that describe a village full of dead bodies … and little else. The background is terse, the imagery is evocative, and it’s missing almost any sort of action. Maybe a locale to put your own plot in to.

The background here is short, a page maybe two of the old-man-eyes font. From it you get exactly what you need: a terse telling of what happened and why. There’s this spear, it belonged to some tribal chief who, along with people, got killed when the current kingdom moved in to the area. It’s JUST enough to handle any exposition the DM may need to create during the game. If the party asks an old man, or goes to some church to find information then the background has provided a short little context that allows the DM to make shit up. PERFECT! This adventure does a magnificent job of leveraging the DM for this aspect. You don’t need to tell the story. You need to provide the DM just enough for THEM to tell the story. The DM is your friend. Take advantage of them. The hooks make sense in the context, even if they are the slightest of pretexts. Someone hid something in the village and can’t get it now because of the quarantine. Someone wants the gizmo that the villagers found. Someone’s husband went to the village to buy sheep and never returned. These are all recognizable but because of the introduction and background/context they have just that little extra gravitas.

The imagery of the twelve encounters is relentless. “A young boy, his head caved in by a hammer and his bare arms scarred with burns, lies sprawled on the floor; his decaying body is riddled with maggots and a swarm of flies lifts off when anyone approaches.” No? How about “Three farmers lie facedown in the pond, two drowned and the other with his head smashed in. The few fish in the water have been nibbling at them.” It does an excellent job on the corpses in each location. The descriptions are short and the impactful, allowing the DM to communicate the scene effectively to the players.

It IS a little relentless. All of the locations have these mutilated bodies in them, victims of the 28-days-later like murder rage. Go to a place. See the murder scene. The issue is compounded, I think, by the slow pacing. There are some of the lord’s men, as guards, at the front gate, preventing entry. Once inside the village palisade there is one murder-rage person left alive to encounter. There are also some ravens that attack as a horde/swarm. Other than that there’s not much going on. Cursed spear in the church. A hole in the ground, undescribed, in the pond, perhaps suitable for putting a dungeon underneath. The relentlessness of the crime scenes along with the slower pacing don’t work well together, I think. I’m sure it’s certainly very moody in play, but you’re left looking for a conclusion. An ending. Or, at least, something to DO … besides look at bodies.

You could certainly use this as a mini-regional feature to enhance some other thing you are doing. Imagine if there was a dungeon under the pond, a big one, and this village the entry point and weirdo’s show up from time to time, ala Rappan Athuk. It needs something ELSE, it’s just a part of a whole and the rest of the whole is missing, be it on purpose or not.

Two more notations. This adventure is twelve pages long. The front cover is one. The license in back is four. The Intro is two. The actual adventure, describing the keys, is three pages. The license length made it notable here, but most adventures do something similar. It feels somehow disingenuous for me to announce this is twelve pages long when it is, for some definition of content, much shorter. I’m not sure it’s fair to point this out for this particular adventure, since a lot do it, but I find it curious that only about 50% of less of the page count of these things is actual adventure … with a liberal definition of “Adventure.”

Finally this adventure provides an excellent opportunity to talk about small wilderness/location maps. I’m fond of the village map for this adventure but it IS missing something: Bodies. I think I noted a similar issue in my review of Out of Blackest Earth. In both cases there is a keyed map detailing a small outdoor area. The outdoor encounter locations kind of merge in to each other. Imagine you are on your front suburban lawn. You can look right, left, and across the street, at a minimum, and see what is lying on those people’s lawns. In those situations it just doesn’t make sense to ignore what the party can see. But how do you convey that? Do you force the DM to look at the map and then go look at all the keys nearby to see if there’s anything there that the party can see? The answer, I think, is the map. If notable features are on the map then it becomes trivial to describe what is going on and what the party can see. In this case, it’s bodies. Simply putting obvious bodies on the map would help the DM relate that information to the party. There’s a similar problem with hex crawls. How far can you see? Can you see the next hex? Can you see the village/town/Mount Doom in the next hex?

Anyway, this the imagery of this ruined village is decent. It’s just lacking ACTION. You need some reason, something more than those provided I think, to add an active element to this location. You could certainly add your own.

5 Responses to The Curse of Ravenmere