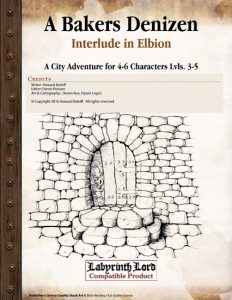 In the heart of Elbion, the city of Mages & Sages, a new bakery is spreading joy and icing to the local residents. The long-time baker Horthron Delb thinks something smells rotten in Ystala Tremain’s ovens, but the people of Elbion just keep going back for the Sticky Icky Buns and the Sugared Orc Ears. The old baker is willing to pay cold, hard cash for someone to end her reign as the new Queen of Quick Bread.

This thirteen page baking-themed adventure describes four dungeon rooms and a small two-room bakery above them. Poorly. Nice mundane treasure can’t make up for the long room descriptions of mundane objects and seemingly nonsensical choices on what to include … and what not to include.

Baker Bob comes across the party while making deliveries to their inn. He asks that they look in to a new bakery that’s stealing his business. He offers our third through fifth level character 500XP, I mean GP, to do it. The adventure is supposed to be a drop in kind of thing, for parties in a city, but then it goes and offers details on a default city of the designers campaign world. Perfunctory details. Three names of inns to stay at. A paragraph of a city description. Some throw off words on why the party is in the city. Four nonsensical rumors that have nothing to do with the adventure. None of it is really needed. The point is a drop in adventure in a city. By neither concentrating on that (IE: the designer has offered details of the city) or by enhancing the city (the details offered are of the most trivial available) then you don’t really strike on either side of the spectrum. The whole “meeting you while making a delivery” is a great little thing, but the reward of 500gp is a little low for a motivation.

The bakery in question has a purple glow coming from stairs in back … so no real investigation. Just walk in , see it, and watch the baker-woman (a witch) run away down the stairs … as several Dark Creeper/Stalkers come out. The whole purple glow and dark C/S stuff makes no sense to me. It looks like it’s just thrown in to have an encounter.

There’s some real missed opportunities. There’s a marlith in the shape of a cat, who would REALLY like the witch dead so she can roam freely. There’s some gilded cages with captured imps in them … that’s really just have a throw off one-liner and nothing is done with them except having monster stats provided. Room are missing key features, things as little as “(200gp)” next to treasure descriptions for things. Two people get four paragraphs of descriptions, each, to describe nothing interesting or really gameable. There’s some mundane treasure descriptions, mostly magical spell components, that are decent, and likewise a new magic item that’s not too terrible (although focused a little too much on mechanics for my taste) but the emphasis on noting “2 candles on the table” and such is really puzzling.

This should be a one-page dungeon, not thirteen.