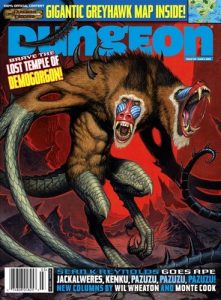 RELIGION IS EVIL! At least according to this issue of Dungeon, featuring evil cults in every adventure.

I can be hyperbolic. I know it. But Jesus Christ this adventure makes pervious Dungeon adventures look like they are minimally keyed in comparison. Two NPC’s each get a page to describe them. The opening encounter, with three jackelweres, take FOUR PAGES to describe. Every. Single. Detail. is spelled out. The hooks are “bad dreams, better save humanity!” or “go rescue my relative please!” or the ever popular archeology expedition. It’s like they are not even trying at all. Our jackelweres get backstory and complex feelings, all to say “they kill people.” It’s crazy. Things get slightly better after the party tracks them back to an obelisk in the desert. Freed slaves will join your cause en masse (Yeah!) and you can bribe some thri-kreen mercenaries (Yeah!) and there’s a mouth you can reach in to in order to get the magical gizmo the adventure is centered around. Still too many words, all boring, but there are some decent concepts. A fountain floods the room in one area and you can disdev it to stop it … I imagine stuffing cloaks in to it to clog it. That kind of thing, putting concepts before mechanics, is what more adventures should do.

Villagers want you to look in to their missing pearl shipments. A long, and not very interesting, village description leads to an ambush by 10 CR1 monsters, and then a linear lair/caves built in to a giant sea arch. I find the lair strangely compelling, even though it is a COMPLETELY linear map. You could do a great job with the core concept or land, cliffs, sea, top of the pillar, interior of the pillar, as a kind of big bandit lair. That’s what this TRIES to do, without doing it very interesting. Kenku bandits. Eagles on top. Sea cats in the water. Ogre mage and an EHP inside along with some “vermin” type monsters in the garbage room, etc. For a “cleaning out the bandits lair” I guess it’s not too bad, if you’re willing to accept the linear nature and exposition.

The Lost Temple of Demogorgon
By Sean K. Reynolds
Level 14

Oh man, this is a rough one. Some kingdom has seen ogres near and want the party to look in to it. And all of the introduction and background and wilderness (all of which is actually pretty short) is just perfunctory in order to present a LINEAR dungeon map. I’m am not shitting. A straight line with a couple of rooms hanging off of it. About 800,000 of those rooms hanging off are little 1000 year old latrines that have been sealed off with walls of stone. WHy the fuck are they being shown on the map? What are they adding? Padding? For it’s bullshit linearity, it DOES manage to embed some nonstandard stuff on the map. Traps are shows. ABout 30 glyphs of wrding are shown. Light sources are shown. (Yeah!) AFter fighting their way through a bunch of apes & trogs the party find a death knight who is using the trog priests to cure his condition. You can fight him, or not. End. THe amount of backstory for the rooms (“this room was once”) doesn’t reach epic level but it is certainly at heroic levels, adding nothing to otherwise bland rooms in which combat with apes take place. There is no joy in this adventure. Mighty Reynolds has struck out.