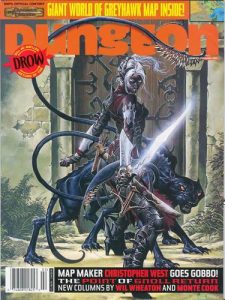 Dungeon Magazine has conditioned me to throw up in my mouth a little every time I read “the party must race to …” Also, that phrase actually means “linear plot” instead of what I believe to be the more common read of “time pressure.”

A linear dungeoncrawl, but not terrible if you accept that limitation. A small section of caves, with goblins, is attached to the basement of a mostly destroyed necromancer tower. An old familiar, and imp, must obey the goblin chief, and he doesn’t want to. So we tries to get the party to attack the lair and kill the chief. It is assumed, I guess, that the parties curiosity leads them deeper in, to the old tower. The read-alouds are long-ish, and I didn’t find them particularly effective, concentrating as they did on the concrete and facts about the rooms like exits, dimensions and so on. The DM text is better, and generally short and to the point, much more so than the usual Dungeon fare. The goblins have an order of battle to respond to the party and there are nice elements, like a refuse pit and weird stuff in the tower basement to play with. It is, though, essentially a linear map and the hooks are meta-gamed to appeal to the party so they will follow the imp. This would probably work mostly fine as is, but you could rip it off, with a slightly larger and non-linear map, to great effect.

Wrath of the Abyss
By Greg A. Vaughan
Level 12

The third and final part of the adventure path. Ok, cities infected with a madness, only this giant cleric knows how to fix it, and they’ve been captured by the drow. The extraneous text is off the hook in this one, even by Dungeon standards. It is, essentially, a set of linear encounters with demons & drow underground, and then a big set-piece battle in the town that reminds me for all the world of those stupid video game battles where you destroy one boss only to have it morph in to another boss. Anyway, you kill a bunch of of the last remnants of House Eilserves, from D3, along with the drow vampire succubus pair, returned from the dead form THAT D-series encounter. It’s just a bunch of encounter, 1-2 pages long each, for the tactics pervs to masturbate over. You get to the last dude and HE’S willing to talk to you. Great. You question the giant cleric and return to town for the boss fight. The underdark cave map is multiple levels, with a chasm, which is nice, and the boss fight at the end DOES feel like a Dr Who/Video game end-game battle … which would be nice after enduring all the bullshit from these last two instalments.

A small cave & dungeon/tomb complex full of ogres, undead, and traps. When you reach the end the tomb gets invaded by a baddie who wants the evil sword the last room contains. The party then gets to use the tombs traps, layout (several chasms) and maybe even monsters to beat back the incursion of the gnoll/yugoloth invaders. The map is relatively simple and probably doesn’t support the kind of hit & run & guerilla tactics that might be wonderful to see in a Dungeon Defender type adventure. It’s got some issues with things missing, like numbers and illusion walls and the like. There’s a room that collapses when weight heavier than human stands on it … right next to a large group of ogres. There’s shit tons of useless background about what each room was once used for and so on. On the plus side, you could/can keep the evil sword if you want, since it’s just an unholy weapon. Yeah! The defender concept is not a bad idea, and the dungeon has potential for that, for an adventure but I think it’s needlessly complex with the addition of all of the 3e demons and gnolls-with-classes combined with 3e stats/abilities.