Out of Blackest Earth 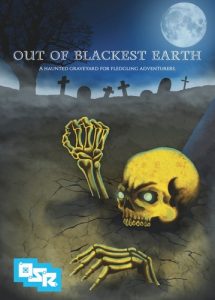 Residents of the small town of Uriah are concerned. The grave site at St. Athanasius Church has lain derelict for a generation. But even if the ground is covered in dead leaves, and some graves are so weathered that the bones are visible, townspeople have nevertheless continued to visit their family grave sites. Recently, however, ghostly apparitions have been reported…

This is a nine page single-column graveyard/catacombs with 22 areas described in a minimal, but functional, manner. It is supported by a decent map and magic items and room descriptions/details that are just lacking … but just a little. Overall it’s a decent set up and dungeon and if it were a bit more evocative I could see it being a solid adventure. But … that’s with my ridiculously high standards. You may indeed find it fine the way it is. As “mini-dungeons” go, I wish they were all at this level of quality.

This thing only has nine pages … and three of those are maps and one more the cover. With a page of background that leaves four more for the keyed encounters … one of which is 50% blank and one of which takes up 50% of the page with a spell description. Using a single-column format, this thing is TIGHT. I wouldn’t call it “minimal”, but it’s about as close as you can get to that word and still be a fully functional adventure.

The background is all in one paragraph at the beginning of the document, supplemented a bt by a little rumor table. The villagers have seen ghosts in the local abandoned graveyard and are offering a reward to put the dead to rest again. The local graveyards are the real culprits, but they’ve awakened a spectre in the catacombs. Folks looking for terseness need look no further than this intro. It does a great job setting the scene and providing an overview of what’s going on. It, along with the rumor table, do a pretty decent job of supporting the DM’s efforts to run the hook while being almost bare bones. I might quibble some the place deserves another paragraph for a tavern with some major quirk to kind of anchor things. The tavern may be a trope, but if you provided a strong/evocative/creative one then the rumors would flow more naturally and you’d have that little bit more …because you know the DM is going to have to do it anyway.

From here the adventure launches straight in to the graveyard keys, of which there are seven, before continuing with the remainder of the 22 keys for the catacombs below. There’s a decent players copy of the graveyard map, which makes sense since the party can see the entire thing, but I wish there was just a little bit more provided here. It is natural for the players to look at the graveyard from outside of it and say “What do we see?” At this point the DM can throw out the players map. You’ve got two choices then. You can describe each of the keyed areas or wait for the players to wander about and describe them … which I think is a bit cumbersome. It would have been better to have a quick overview description of the entire graveyard. A little scene setter. Closely related, there are a couple of creatures in one of the sections, disguised graverobbers, who come out to scare folks. But if you don’t remember that fact then the characters could walk right by and you’d be left waiting until you got to that particular keyed entry. Noting that encounter on the map, or in the overview, would have a nice little assist to the DM.

The maps are, otherwise, great. The graveyard proper is a free roam wilderness-type area, albeit small, while the catacombs map is a decent layout with caves and catacombs, a few loops, a river, lots of detail on the map, and about five different entrances to get from the surface map to the under area. Very nice. The map isn’t just a key to the adventure but adds evocative details and creative play opportunities … at least more so than the usual dungeon maps do.

The encounters are pretty minimal in their descriptions. Focused. Encounter 4 is “Dry Well: A hatch to #12 is concealed in the bottom clay. There are scuff marks from a grappling hook on the edge of the well.” This level of description is, in general, pretty close to the minimum I think you can get away with and still have a chance of having a somewhat decent encounter description. It’s a dry well, we get that from the title. Clay on the bottom … scuff marks, and a note of where it links up to the lower level. If you will follow along with me for a moment and accept that this is a baseline, then we can judge the rest of the encounters by this one. ANother one is “Tombstones. 2 graverobbers are hiding amongst the tombstones disguised as undead. They try to scare away intruders.” Again, very focused, but I will note a major difference that sticks out because of the minimalism: the room title. “Dry Well” tells us something about the well that we can use to convey a feeling to the players. “Tombstones” gives us nothing but the noun. Adding “Weedy” or “crumbling” or even “faded” would evoke some kind of additional vibe in the DM. Likewise, room one is “Funeral Home”, but there is nothing much more provided except it has a stone bench to put a coffin on (I thought coffins were for vampires and caskets were for the recently departed?) and a carved stone skull on the wall. Adding one word to the title could be “Ruined Funeral Home” or “Bright lit Funeral Home” or “Collapsed Funeral Home” All of these give us just a little bit more … and that little bit more is what the preponderance of the adventure descriptions are lacking. It needs just a little more. Minimalism is an art. There are NO extraneous words in this adventure … but it has, I think, crossed the line and left out a few words.

The creatures are vermin & men, for the most part, which I like. In particular one of the beetles has the following little bit about the poison they spit: “the opponent su ers extreme pain, chemical burns, blisters and a –2 penalty to hit rolls for 1 day, or until the spell cure light wounds is used.” Yes, there’s the mechanical effect, but I really liked the additional little bit about blisters and burns and pain. It’s fucking obvious, of course, if you think about it. But the writers have put just that extra little touch in to help the DM add a little more flavor to their game … without going overboard. That’s a GREAT touch and it left me wanting more.

There’s some nice magic items, like a religious relic skull that helps you out with turning, nice mundane treasure in the form of things like a silver death mask, a ring that stops aging, and a new spell. In particular, the magic items mechanics are not exhaustively described. The ring stops aging and if you take it off the years catch up with you. The end. The skull allows for turning undead once an encounter. Nothing more. I understand some people want more in the way of mechanics but I think the game has turned too much in that direction and a little more wonder, mystery, and ambiguity is in order. I would note, as well, that there’s an orb that, if broken, animates all of the dead in the graveyard and they go to town to wreak havoc … ala Death Frost Doom?

Besides the (missing) descriptive words there are a few other things that could be better. The graverobber gang could use a few more words, maybe on negotiations or deals or reactions or organized defenses, etc. Likewise the adventure abstracts things at times. “Plundered grave goods worth 1,800gp.” Another two sentences for this would have both provided some little bits (hopefully more than “rings, lockets, necklaces”) and perhaps some hooks both to follow up on for more adventures or complications that come from fencing family grave goods.

Anyway, pretty decent adventure. Inoffensive with some good ideas. I’m keeping it. Apologies again, to the designers, for mutilating their “umlaut” names. Sorry, I’m an ignorant american who can’t remember the magic keystrokes. On the strength of this adventure I’m motivated to look and see what else they’ve done.

2 Responses to Out of Blackest Earth