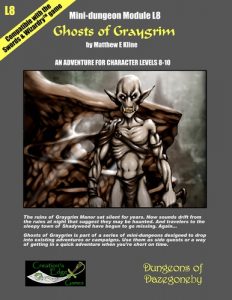 The ruins of Graygrim Manor sat silent for years. Now sounds drift from the ruins at night that suggest they may be haunted. And travelers to the sleepy town of Shadywood have begun to go missing. Again…

This is a 26 room manor-basement dungeon spread out over eighteen pages. Creations Edge does a lot of these short projects and, thus far, they’ve all been of a similar vein. A little stodgy, vanilla, and straightforward, it does a decent job with treasure and with a couple of “complications” that arise during the adventure. The set up is inoffensive, but otherwise the descriptions are flat with a sameness and … genericism? to it. The map is pretty bad, being just three hallways, each with doorways hanging off of it.

The hook is a 2000gp reward or, even worse, “hired to look in to a disappearance.” These are the usual hooks that show up in almost every adventure ever published. There’s nothing to them, especially for a level 8-10 character group. It devolves to metagaming: “this is the adventure we’re playing tonight. Just accept the mission.” That’s kind of inherent in all D&D, but hooks which go a little beyond that deserve special praise. This ain’t that.

Anyway, the village is suffering attacks. The smith was abducted. Please go up to the old haunted ruins and check it out. The whole setup is ok, in concept, but falls down in execution. There you find a secret door leading to a dungeon with a werewolf, a vampire, and a bunch of 6HD goblin-based baddies. There are two little interesting bits in the lead up to the dungeon. First, while half the village hails the party as saviors, seeing as they are suffering raids by the “ghosts”, the other half abuses them for not coming sooner. Especially those villagers who have lost loved ones. Ouch. That’s some good stuff right there. It’s not really expanded on in any way beyond what I’ve described, but even that little bit is pretty decent. The mayor calms things down, but you should be able to get some great roleplay out of that. There’s also a small boy who can relate some info to the party and guide them to the secret door; he shouldn’t be playing up there and found it but offers it up to the party in private. He also hangs around the ruins. And later follows them in. It’s suggested that the vampire capture him in the final room, but I think that’s pretty hackneyed. But having him follow the party in, get in to trouble, be escorted out, go in again and have the vampire grab him DURING the combat? That, also, is a bit of a classic, but I like the dynamic nature of it.

The treasure is above average as well. A black opal attached to a silver necklace … covered in bits of flesh. A black onyx ring in silver engraved with a vine pattern. A glass globe with a faint hint of a tiny ghost figure inside and a silver ring surrounded by a shimmering blue flame hint at the magic items. Nice little touches although they turn out to be a bit mechanical in their uses, summoning a stalker and doing 1d4-1 fire damage to attacks. But, still, nice effects and descriptions.

There are, I think, three major issues: the descriptions, the monsters, and the map.

Terse isn’t exactly correct. “This room holds four large treasure chests.” Ok …. “This room contains excess material for crafting weapons in the forge.” Ok …. Those are the descriptions for two of the more mundane rooms. For the fantastic, how about “This large rectangular room holds a sunken pool. The pool seems to be filled with blood.” It’s not overly long, to be sure, but nor does it add … anything? to the adventure. This gives the rooms the generic/vanilla vibe I mentioned in the introduction. You can, to be sure, do something with this. But you’re also bringing a lot of your own to the party to do this and one of my core philosophies is that it’s the job o f the adventure writer to bring those evocative, effective impressions to the DM party. This doesn’t do that. Room after room, it doesn’t do that. A room or two has something interesting in it, like a bookshelf or prisoners, but for the most part the actual rooms are little more exciting than the read-aloud descriptions.

The map is VERY simple. You come down the stairs in to a square room. Three other exist, one in each wall. Each one has a corridor with doors hanging off it, with rooms behind the doors. That’s not too good. It doesn’t really provide much playability from the map. No real ambushes, bypassing things, or fear from the unknown. Additionally, one hallway, with doors on both sides, has both prisoners, locked doors, and goblin monsters in them. The map would have been an excellent way to show which of these rooms has monsters, which doors are locked, and so on. That would have been a great reference aid for the DM so they could then go look up rooms if the baddies start pouring out of the doors. But, alas, no. It does show secrets, and room features, so it’s a bit of a poser why locked doors also weren’t shown.

The goblin/vampires are the last issue. There’s a lot of them. They are all 6HD, serving the vampire. I can deal with that, I guess, by thinking of them as vampire spawn like creatures. But them come off, with their numbers, and HD, as just generic goblins. “2 goblins live in this room.” “4 goblins live in this room.” Well, shit, that’s pretty shitty even if they WERE just goblins. But as goblin/vampire-like hybrids its a little lame. “This cell serves as the living space for two stirglins. They will be here asleep under moldy blankets.” If you are going to treat them like humans (not even goblins …) then why not just make them humans? Degenerates or something? I HATE it when my abominations live like human guards in the dungeon, with bends and playing cards and the like. Bleech. No flavor. Which is too bad because little degenerate blood-sucking goblins would be kind of cool. Their quantity also makes the dungeon a little hack-festy, which if generally a no-no for S&W, I think.