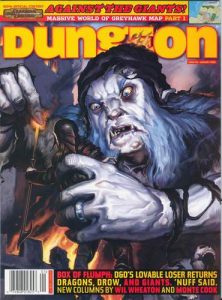 The usual sort of Dungeon dreck. It’s event based, has a small “investigation” that leads the characters around by the nose with a plot element and LOTS of advice on to keep people on the tracks. It all ends with the usual big combat and has lots and lots of backstory and history that are meaningless to actual play the adventure but clog it up.

The town guard want to keep an eye on a known criminal but are just too busy, so they hire the party from a job board. Asking around they find out the guy was seen in a tavern on the pier. Making a DC40 check (at level one …) lets the party know the guy has a room at the tavern. OR, if the party just leaves then there’s a scream from upstairs. A thief with a paid hit contract on the guy has entered his room and found a flumph in a crate. Combat ensues. If the flumph lives it sends them to a ship to save its family. If the flumph dies then someone outside sells the party the location of the ship, and the bad guy. On the ship his buddies stick up for him and are rewarded by him sinking the ship, bringing some sea ghouls in to the combat also.

The investigation is nothing more than the token stuff, a simple excuse for events & plot. And no real chance of failure. It’s just a sad sad adventure with nothing at risk and no real reward. The family unit of Flumphs is weird also. It sounds like a Leave it to Beaver family unit. More monsters without character. *sigh*

Shadows of the Abyss
By Greg A. Vaughn
Level 11

Part two of a three part arc that started last issue. And another of the usual Dungeon do-nothing hack-fests. The sage from the last adventure is missing. His staff thinks its all normal and are not worried. A day later the party gets a note telling them to meet up or the sage dies. From there the path leads to an abandoned fort with giants in it. Hacking through it you find that the giant that knows about the evil god in your city has been taken to the underdark. Sorry Mario, your princess is in another castle. Because I’m a lazy designer. The usual “nondetection” crap is at play, so you can’t skip shit. There is, weirdly, a few location (three) in the region that are given an overview. All of the overviews are pretty decent, with nice little hooks to hang your hat on … but there’s no real reason for them to come in to play, and they are VERY location specific. One room has some treasure stuffed inside a dead orc head. Nice touch that. Otherwise, it’s a pretty forgettable adventure.

IUZ! My Boy!
All that bullshit backstory from D&D about Iuz is lame. I will always think of him as an adventurer that became a demigod. All his shit continually reminds me of player character scheming. A murderhobo made good! Anyway, the adventure … in which Iuz doesn’t appear …

There this elf forest. Inside of it is a 80 mile long by 50 mile wide blighted area. The elves don’t know about it. Some orcs have made it a home. They recently ventured outside of it and took over and defiled an elven burial ground. They are building a “throne” for Iuz underneath it … which really doesn’t do much except kill plant line all around it, so not really an Iuz throne after all. Anyway, the elves are clueless and all of the orcs, all 105 of them, are LEAST cr9, with quite a few being in the 14-16 range. Cause, you know, the adventure is written for level 14 characters. Anyway, some generic hooks are thrown out. Does your CR14 character want to investigate a caravan disappearing? No? Go on a fetch quest for a poor half-elf noble? No? Two strikes on the Boring-O meter. The third hook send the party after the orcs to unlock hidden powers in some weapon/item they’ve recently gained, which is better. The whole thing is just one area, a burial mound, with all those CR9-15 orcs, and 15 chimeras they’ve trained to fly around on. Their leader, under the mound, is a giant CR16 frog. There’s invisibility purge items in the camp and mounds and mounds (get it! Get it?!) of backstory for items, people, and locations which will absolutely NOT come in to play in any way.

Most of the sins of bad high level adventures are present. Lame-o hooks that assume the party are still level 1 scroungers. Magic items that work against you but you can’t use. (So what if the party takes the giant inviso purge geodes? They’re level 14, who cares?) No digging/teleport gimping, but the inviso purge area stands out, in order to ruin a stealthy assault. And there’s the CR9 orcs riding a flock of tamed chimera.

Most of this could be solved by making this a lower level adventure. Level 5 or something. Then the orcs are still mundane and still a real threat. The giant frog as their king would be cool. Maybe a chimera as a pet or something. And, most importantly, it would introduce a major villain, Iuz, through one of his minor dudes, the giant frog, thus foreshadowing a major villain to come: Iuz.