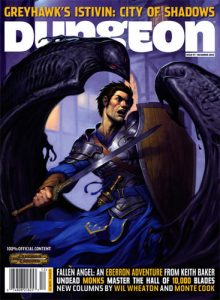 A linear adventure inside a glass tower in the Fallen district of Sharn to recover a statue. You’re hired by a rich chick to recover a statue fragment, a hand, stolen from her. She sends you to a cleric in the Fallen district, a real scum/cannibal/hellhole district of the city. The cleric points you to a tribe of feral humans in a certain hall. There you find a glass spire from a fallen floating tower is sticking out of an old manor hall. Exploring you fight some bestial sub-humans and their doggy pets. It’s strictly a linear affair, with the investigation portion being quite small. It’s got a terser writing style than most and if you squint REALLY hard you can get some evocative imagery out of the thing. Mostly because the setting is relatively fresh with a small streak of fantasy-ish gonzo (instead of sci-fi gonzo.) It has a decent magic item, a book that lets you learn to speak blink dog, as the cannibal barbarian sub-humans do, at times, allow for some talking and negotiation. Not bad for Dungeon, the concept is a decent one. Better imagery and a more fully fleshed out journey to the tower and hall/tower interior would have turned this in to something quite interesting. I’d run this if I were desperate, or rip the ideas off for something of my own. Then again, I’m quite partial to an all-urban campaign.

Touch of the Abyss
By Greg A. Vaughan
Level 11

This adventure, the first of a three-part arc, is supplemented by an overview of the city, Istivin, it takes place in earlier in this issue of Dungeon. In this first part the adventurers are introduced to the failing city and encouraged by a sage to seek out answers in the keeps deep dungeons. This thing has some nice atmospheric bits in the general overview sections of it but then falls down in the MEGATEXT it bogs things down with and the decidedly un-creepy room real-alouds in the dungeon. The hooks include a kind of mad scramble for lands & title in order to get the party to the city, which seems a nice follow on to G1-2-3 in the history. The city is failing and this is communicated to the DM well in several paragraphs at the start, much more so in fact than the stand alone city guide that also appears in this issue. There are some events to spread out that do a decent job of bringing the creepy also. It all leads to this sense that the city is failing. But the lengthy stat blocks, tactics sections, nightmare-length sage read-aloud, and general obsessiveness with rules in the text drags it down. Once the dungeon is reached it again does a decent job of setting the scene, generally, and even has a decent empty room or two, with flooded stairwells and so on. But the ACTUAL encounter rooms tend to the boring side of things with the magic of those other rooms lost. This could be A LOT shorter and would gain immensely from being so.

“Players must survive The Winding Way, a series of deathtraps and trials created by the orders head to test the skills of senior students.” IE: The curse of S1 strikes the unimaginative again. I try to comment on the work, rather than the artist, but these deathtrap/trials/tests stuff seem like the epitome of lazy design. … Having read it … There’s nothing to this. It’s fifteen encounters in a courtyard-ish monastery and then six linear deathtrap encounters. Undead, intelligent undead, monstrous undead … it’s just fight after fight with some deathtrap shit at the end. The undead are generally non-standard, which is nice, but their use as combat-fodder negates anything interesting actually coming from that.