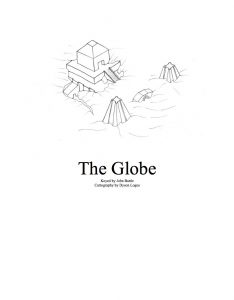 Among the snow globes that sit gathering dust there is one quite unlike the others. One is full of sand and an ancient library. Shake it and you’re transported to the dungeon.

This is a free 27 room ziggurat inside of a snow globe. It’s a nice journeyman effort, doing nothing spectacularly but also not really failing in any area and hitting on a consistent above-average level with periodic GREAT content. It does a pretty good job of toeing the line being fast, loose, and evocative. It looks like it’s some kind of introduction to the OSR style for folks from the 5E/Pathfinder world. I don’t know about that, but I do know it does a pretty decent job of invoking a kind of OSR style. It certainly has room for improvement, quite a bit so in the “editing” category since there are lots of places where little bits are missing/overlooked. But that’s a pretty minor quibble, especially if we consider this a first draft effort.

The set up is exactly what the intro says. There’s almost nothing more to it but what’s in the introduction. And you really don’t need much more. The front cover, above, gives you a pretty good idea what the party sees: some ancient stone ruins covered in sand. Other than this there’s a very short background section and then a short description of the four major factions in the dungeon.

What’s great is that almost everything is focused on the players. How the players interact, how they interact. There might be a sentence or two of background, but most of the history and NPC sections are devoted to the actual play. How the DM can use the data.Where the monsters wander. How to use them. This is a theme over and over again in the dungeon. The dross is cut out and what’s left is play focused. Short, punchy descriptions with stickiness to them that remind me a lot of the best the OSR has produced. And it’s all got this slightly weird vibe to it.

The map has several levels, with several staircases and features to it. Same-level stairs, an outdoor element to get to some spires, ramps, sand choked hallways and stairwells. It’s a Logos map and it’s one of his better efforts. Sometimes his maps can feel small or linear. Not this time. Multiple entrances to the complex, light vertical/three dimensional elements, and a nice isometric sort of overview map to show how all of the levels and elements work together.

I mentioned factions. There are probably at least four. First you’ve got these weird “mummy” things that are some kind of cross between sandmen, mummies, and zombies. They beg for help, crawl, wail, and … Wait, here’s the quote: “They don’t understand what has happened to them, that they have already died and walk as undead. So they crawl, limp, and stumble towards anything that lives while they beg for help.” That’s pretty nice. It’s one of the better monster descriptions, and reminds me a bit of those great undead descriptions in the better Dragonsfoot adventures.

Beyond the zombies we’ve got a sphinx looking for answers to a riddle, an NPC party running around, and a “twisted lich” who’s only goal is to steal teeth. More than enough to work with. And some of them have random starts, clues that they’ve been in certain rooms, and or move around the dungeon.

It’s got four pages of maps and around four pages of keyed rooms and about four pages of monster/faction descriptions, background, etc. This is all done with a good font, wide margins and easy to read formatting. I approve. I don’t think it was probably anything more than a standard Word template, two column (the headings look like a familiar Word section heading font/colo.)

The room descriptions, as I mentioned earlier, are quite focused. Here’s an example from room three: “Door chained from the outside. A Mummy wriggles its arm between the door and frame. The chain is new.” Mummy arm wriggling is a great classic image. The chain being new tells the party things … someone else is here. That kind of simple and classic encounter type is present over and over again. The language isn’t exactly flowery or overly obtuse, more straightforward. But the focus present there in that description is great. One step more than minimally keyed. The adventure does this sort of thing over and over again. Broken furniture piled in front of doors, skeletal corpses piled on the floor, reaching out, as if trying to escape. The traps gives clues to their existence sometimes, like “pulverized stone and a flattened decaying body”. It even has just a slight touch of silly in places with the sphinx treasure being focused on “headgear/hats” and the library having a “Fanfic” section.

And now for the negatives. The mummies shows up as wandering monsters, mostly, and have a 33% chance every turn. That’s a pretty high chance/lots of mummies, even if they are capped at 30. They also range from one to four HD. I would probably vary the descriptions of them, in play, to give some clue as to their differences … then again I hate 8HD orcs. Silently changing the rules CAN be used nicely in games … but it seldom is.

The adventure also has some typos in places. “NPC sits in the magic circle.” … that sounds like a fill and replace mistake, and there are a couple of other examples of that sort of thing as well … hence the “first draft” comments above. In addition there are little errors of omission … at least I think they are omissions. A few monsters stats are left out here and there. In addition there are little bits that I think could have used just a FEW more words. One romo has some Draught in it … gin made from coffin wood. That’s just begging for one more sentence noting drunk effects and bonuses to death saves, or some such. There are a few other examples of little things like that. The treasure is not generic/terrible, being one step above with descriptions like “scarab earrings” and “amber ring”, and in some cases they are REALLY nice. But they could, in general use a few better words to bring them to life a bit more. It’s also not clear to me that there’s enough loot in the dungeon. It’s somewhere around level three, I’d guess?, and there doesn’t seem to be more then about a level one amount of treasure present, for XP=GP games. Finally, the writing, while serviceable, is a little straightforward.

This is one of the better free adventure I’ve seen. Buffed up a bit it could be a solid nine on a ten point scale.

This is free at:
http://insidethegiantseye.blogspot.com/2017/01/dungeon-crawl-globe.html

2 Responses to The Globe