Arsenal of the Warrior Princess 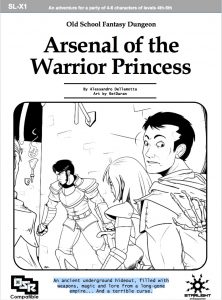 An ancient underground hideout, filled with weapons, magic and lore from a long-gone empire… And a terrible curse.

This is a seventeen-ish room dungeon spread over 21 pages … that’s been formatted to fit on four print pages in folio format. It’s an ancient complex with undead and vermin. There’s some decent non-standard magic items in places, and unusual magic items for the book items. There is also some decent imagery in places. In other places you have to work for it and in still others it’s a little fact-based for my taste-in-room-descriptions.

The pretext here is quite light, but strong enough to sustain it. It’s an abandoned complex of an ancient empire. You’ve got two possible pretexts presented. First, the party could be after some kind of magical research thingy and since there’s a magical lab inside you could find what you’re looking for there. Second, you could have found this magic sword, cursed, and you can lift it by exploring. This is a nice contrast to the usual plot-dreck. In other words, the dungeon is presented as a place for you to wrap your own characters story around rather than a place to have the designers shitty ass plot forced down your throat.

This suggests an interesting question: which is worse, a crappy exploration dungeon or a crappy plot based adventure/dungeon? Is the answer obvious?

The room descriptions are a mixed bag. There is a decent attempt, in some of them, to provide some nice imagery. A skeletal blacksmith has a hammer wreathed in flames, and a dim fire burns in other skeletons eye sockets. The blacksmith gestures for them to rise … It’s a little … direct? Inelegant? In its implementation. The noun/verb choice is pretty straightforward instead of a more esoteric usage to convey hidden imagery. Still, above average. Even during the pre-animation description of “A decayed skeleton wearing a blacksmith’s leather apron lies propped up on the wall next to the forge, hammer in hand. He still wears a golden key on a chain around his neck. Another dozen skeletons are scattered throughout the room.” It’s the specificity. An apron, propped, key around neck. Not the greatest ever but a decent image without getting too bogged down in useless garbage description.

There are a few other descriptions like that in the adventure. If you squint hard then you can see opportunities for others. The wanderer table has a few things on it that are ripe for this. “15 skeletons with sword & shield.” This was an old military installation. Well, they are obviously patrolling, all Red Square May Day style. Until they reach a room and then they enter it all Rainbow Six tactical style. “2 wights”, and they both happen to wear silver rings. Why not glowing with bright silvery light against the wights decaying background? I’m being, perhaps, a little too generous in my squinting. On the one hand the )brief) background gives rise to the inspiration that feeds this (Yeah!) on the other hand I don’t review fluff product because “I was inspired by it” is such an ambiguous measure. Objectively, a little more of “what they are doing” would have been nice for the wanderers. Subjectively, there was enough here to push me in to filling in the details … which is one the reasons I harp so much on the terse (easy to use by the DM) but evocative (captures the DMs imagination) description. The wanderers (and some of the other encounters) are overly terse AND lack the evocative nature … but I picked it up in the rest of the product.

But that doesn’t touch other areas. One of the weaker rooms ia an armory with a door “marked with a magical glyph” and “and ancient cracked amber golem in the shape of a tiger.” These are mere facts. “Ancient” is a conclusion, in this case, not a description. Showing, instead of telling us it is “ancient” would be better. And there are more than a few rooms like this.

The designer contacted me and asked for feedback, so I’m going to fall in to the pedantic now and play Editor. You may want to skip this paragraph. Taking one of the better rooms, “3. Forge” we immediately see a missed opportunity. “Forge” is boring. Why not embed a description? What’s the overall sense of the room you want to convey? A massacre, long passed? Or, I see the forge is still lit and the description says “casting a dim reddish glow on the room.” That’s a decent first impression. How can you update the room name to better convey that? “3. Shadowy glowing forge”? I’m terrible at this, but you get the idea. Second, I see that the first line of this room’s description, and most rooms description, are the dimensions. “This 9x15m room used to be a well equipped smithy.” Well, we know that. It was the room name, remember? Secondly, we know the room dimensions. It’s on the map. The map is a real map, and not some art school project, so you’ve got a grid. Don’t pad the room with useless words. The designer of Adventure Mos Fowl just commented, on my review, that “better to have it and not need it, right?” He’s missing the point. WHile that could be said, it’s also critically important that the words not get in the way of the DM running the room at the table, which is amazingly easy to do. SO watch your room descriptions. Focus. You go on to say that there’s an anvil up against the wall (duh, it’s a forge, does this add to the room, or the gameable nature? If the anvil was missing and was the key to getting to a secret door, maybe, but that’s not the case here) and that there’s a narrow air vent. Again, while wonderfully pedantically historically accurate, not necessarily applicable to running this room. You want to put a thin trail of smoke in the room description somewhere? Ok. But that’s an appeal to the evocative and is a visible effect of the air vent. The last line of the first paragraph(!), The shadowy room being lit but a dim reddish glow, is DYNAMITE, as is the second paragraph, describing the skeleton. You might get rid of the first paragraph and combine the two so the skeleton is lit, barely visible, by the dim reddish glow? The third paragraph, a list of mundane objects, is lame. Convey it terser and/or combine it somewhere else. The monster description is good, but the additional “he does not talk but he is no mindless undead. He is sentient and cunning” is padding. He’s cunning. Or he’s [insert a better adjective.] Finally, you’ve clearly made a very deliberate choice in dividing the room content in to different, labeled, sections. “Haunt”(nice!). Room. Monsters. Treasure. Feature. I’m not going to pass judgment on that, except to say that separating out the “Haunt” is a good idea. I would, however, leave you with a couple of things to think about, understanding I’m not necessarily telling you to change things. First, If the room is so wordy that you have to have separate headings for each little thing, then maybe the room is too wordy? Second, “Room” is obvious, and probably doesn’t need a heading. Its implied because … we’re reading about a room. Second, monsters are usually obvious in a room because of the stat block. In any event, a separate paragraph, with a stat block. Is usually enough, I find, to find the creature. Usually. Finally, the treasure/feature, located at the end of the room after the monster description, is probably adequate. Or, you could mix & match heading as needed to bring out important information. IE: don’t be slave to including the headings in EVERY room, but just use a heading where you think you need to call something out. I don’t assert your choices are wrong, I’m just giving you other things to think about.

The magical items are interesting and are a mix of non-standard and unusual standard. The forge is lit by a severed fire giant hand, that burns eternally. Nice! There’s a +1 dagger made of ice that also deals cold damage and can freeze liquids and put out fires with a touch. Nice! Magic silver platemail, which can deal damage when silver-vulnerable monsters touch it. The final monster, the warrior princess proper, can even be won over to your side and used as an ally and NPC in an ongoing campaign. REALLY nice touch there! Further … she’s got PHAT LOOT. Kill her and take the Loot=XP or keep her as an ally? Oh, the despair of choice! You know, there’s another room like this, a room with an ochre jelly. It doesn’t attack unless provoked. If you kill it it turns out that there’s treasure inside. I would have TOTALLY played that up in the description. Make it obvious it has treasure inside. Or imply heavily it does. Put the big red button in front of the party and dare them to press it. There’s another room, with normal spiders with human intelligence, that misses an opportunity. This roleplaying GOLD and could use a sentence or two more to expand on some personality, what they know, etc.

There are some visual aides in the back of the adventure, to show the players. Props are always nice. The concept of a “four print pages” format is pretty interesting as well. I remain a bit skeptical about it working out in practice … the font is a bit small already and printing two per page … my old eyes may protest. The formatting and wordiness detract quite a bit, IMO, from an otherwise generally decent adventure … that has several rooms that need some extra evocative help. I think it’s a first effort. If so, it’s an excellent first effort.

2 Responses to Arsenal of the Warrior Princess