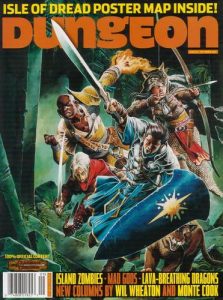 In this issue dungeon changed formats again. It loses Polyhedron and gets more content.

Holy shit! A Dungeon adventure that doesn’t completely suck! If you can accept a Sensoria/Do Right hook, and the usual mountains of background/exposition that plague Dungeon, then this is that rarest of things: an ok plot-based adventure in Dungeon. Two thugs loot a shop across from your inn in broad daylight. This leads to a thug on the docks who hired them, which leads to a building that serves as the hideout for a street gang. That leads to a tomb nearby hiding a Vecna cult. I LUV the whole idea of a Cyperpunk-style looting in broad daylight. Just stroll up to a shop, toss a garbage can through the window, and begin looting. People in the inn across the street watching? Who gives a fuck. Fortune favors the bold! If the party spares those two street thugs I swear to god, Donnie Baker style, that they would appear in every adventure I ran from then on out. The adventure also feeds info to the players in several ways. There’s some clue that leads to the next location, and generally if you take a prisoner then you get some extra information. That’s a nice touch that rewards folks who use just a little more brain power in their murder-hobo’ing Always Work/Go To Church do-gooder lifestyle. The encounter of the docks is a little forced and is clearly an indicator of the 4e Skill Check system to come, as there’s a chase across skiffs moored together with each having some little challenge on it. Fish guts, a drunk, etc. The street gang manor house is an ok location that stretches reality near the end in a set-piece in a room full of veils. Finally, the temple at the end, taken over by the vecna cult, has some memorable stuff, like a stone skull spewing blood, a secret door until a pool of blood .. with the blood in the pool draining down the stairs when it’s opened. Sweet!

This is all a set up for Living Greyhawk. This poor quality of this Living shit has been inflicted upon me at every DDXP/Winter Fantasy in Fort Wayne. This one is about a zillion times better than my (limited) exposure to the linear Living hack-fests I’ve seen. WAYYYYYYY too many words, with too many “used to be’s” and relevant background data, but I think it’s worth checking out.

Isle of Dread: Torrents of Dread
By Greg A. Vaughan
Level 6

Second verse same as the first? There’s a mini-setting in this issue describing the Isle of Dread, and this adventure accompanies it. Your ship, in a storm, needs supplies and repair and you’re sent ashore by the Captain to make arrangements with the local village. There you find them, essentially, barricaded in their homes during the storms. Strange things are afoot, with disappearances, the matriarch dead, and the witch doctor missing. Undead roam the graveyard and the central pyramid has bullywugs on top! Underneath are water-filled muddy catacombs with undead and bullywugs and finally, the now-evil witch doctor. Two of Dreads big bads, the kopra, are in a room conjuring the storm. It’s not a bad adventure, but does bad things. A lot. The captain you three potions of tongues so you can talk to people in the village. Bad Mojo that’s a little too deus ex for me. Either use gestures to talk, or give all the villagers perfect english accents, or use the MU to cast comprehend languages. But by giving the party potions you introduce an obstacle and then do NOTHING with it. You also have to beg the villagers to help, with rolls, which is always lame, IMO. Don’t want my help? How about I burn the place to the ground instead of begging? The text is long in places, with WAY too much background data that is irrelevant, as is the style with Dungeon. Finally, I think introducing the kopra in this adventure is a bad idea. Saving the village is a great introduction to the isle of dread. But revealing the big bads immediately? I don’t know. For a Dread campaign i can get behind the foreshadowing aspect. But if you were using this as an intro to X1 I would probably do something else. Finally, the catacombs, under the pyramid, are a little too combat oriented. It’s like every room is a guard room, and all hallways run directly in to rooms. This turns the adventure in the catacombs in to a hack-fest, IMO, instead of a “smart party” adventure.

On the plus side, the tropical storm is a great backdrop for exploring the village, without it being too much of a pain in the ass to run, rules wise. Likewise, the partially flooded catacombs, muddy, dripping water, full to about 3 feet, is a nice little environment challenge also without being too much of a pain. The “conjuring” is centered around a bronze tablet. GREAT prop for a conjuring on a low-tech island, bringing up Lovecraft, low-tech cultures, and the like. Finally, this could be a great “first adventure” for bringing parties on to the Isle. It gives the villagers a reason to aly with the party, assuming they solve their problem. Finally, if the summoning/storm spell DOES succeed? It brings a new creature to the island to terrorize folks … left unspecified. MYSTERY is always welcome as a springboard to the future. So, issues, but not terrible, especially if you want to use the village as a springboard to other adventures on the island.

Textbook shitty. Just a bunch of rooms with traps and monsters. Everyone is prepared to fight. Teleport doesn’t work. There are fake walls to stump Find The Path. Bad guys wear “rings of the thirteen” that give them a +2 ac, endure elements, and nondetection .. .and can only be worn by evil people. The place is full of “very realistic curtains that actually feel like a stone wall!” to hide things. Pretext after lame pretext to fuck the party. All so you can go to the next room and fight something in it. Tactical bullshit text all over the place. I’m sure this is a wet fucking dream adventure for the rules mastery/min-max crowd.