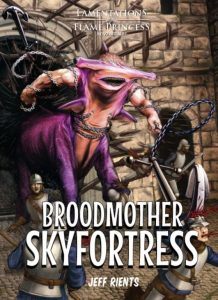 Jeff Rients is fucking crazy. And I mean that as a compliment.

This is a 173 page digest book on how to DM a great game … with an adventure included and used as an example. The first 95 or so pages are the “how to with adventure” with the rest of the book being “a best-of from Jeff’s Gameblog.” The entire booklet is in the same conversational voice Jeff uses in his blog, making this a low-density affair in terms of traditional content . If you’re buying this for the adventure then you’re making a mistake. If you’re buying this for advice from Jeff on how to design and run an adventure then you’re buying it for the right reason. It’s packed full of great advice and chock full of alternatives and ideas. What you are NOT getting is a dungeon taking up 173 pages in traditional room/key format. The nominal pretext is atha a big sky castle is raiding villages. Or, as Jeff says “What would happen is a bunch of giants showed up here and wrecked the place?”

Let’s cover the second half of the book first. It is, true to word, a best-of from his blog. This includes carousing, motivations for jackass players who can’t figure out why to go on an adventure, dungeon dressing between forays in to it, his famous 20 questions, and a variety of essays on morale, XP for exploration, and a variety of house rules for his own D&D-Mine. Jeff’s blog is insightful and his approach to D&D is pure joy. That comes through in his essays & writings in this section. It generally advocates a less “Holy Writ” approach to D&D. Monkey with the rules. Monkey A LOT with the game world. It’s all a kind of big old lego set that you can break apart, rearrange, destroy, and build upon in a free-wheeling fashion. The style of D&D is describing is one close to my heart and that I aspire to. It looks like all of the included material is essentially the same as is on his blog, but collected. You’ll four or five of them a repeat of Miscellaneum of Cinder … one of the three reference books I keep handy at the table. Is there were ever an OSR “Dungeon Master’s Guide” then Rients columns should be a required part of it. The advice is invaluable. He does tend toward the silly side of D&D, but not so much so that it becomes cartoony (in spite of the cartoon art style in Broodmother.) D&D works best, I think, with some moderate pretext of seriousness that devolves in to archtype NPC’s, crazy plans, and weird stupid magic items (and their exploitation.) Traditional Gamma World games usually work out this way as well. And both do NOT work when you TRY to be silly … 4e Gamma World I’m looking at you. Anyway, Jeff is encouraging to get really close to the line, take a load off, and have fun. The line for SIlly will be different for everyone but he doesn’t cross it. What he does do is promote AWESOME.

As for the adventure, well … let me cover the monster section of the adventure in detail. From that you can extrapolate to get an idea of what the rest of the adventure is like. Generically, the monsters get some OSR stats. For example, the primary villains, the giants, get a set of OSR style stats. (There are also some Pathfinder style stats later on in the book that look like one would expect for Pathfinder.) These are pretty normal. AC:17, HP: 10d8, Mv: 120, +10 hit, Morale 10, Save as 10th level fighter, hit things for 4d6 and throw boulder for 3d6. Jeff labels this “Boring Generic Fantasy Roleplaying Game stats.” He then Jeff’s it up. Fuck your rules. Generic stats are boring. Let’s wreck the players expectations and put the fear of the gods in to the party! It’s Clobbering time!

The new giants stats don’t have an AC. The players don’t even have to roll to hit the giants. They are so big that you can’t miss. Think about that for a minute. When you relate that to the players somehow. “No, you don’t need to roll to hit. It’s so big that there’s no way you can miss.”
What are your players then thinking? I’ll tell you what they are thinking. They are thinking the same thing every single roleplay gamer in the world would be thinking when told that by the DM. “Holy fucking shit man! We’re in trouble! Game over Man! Game over!” You, as the DM, have now effectively communicated the situation and vibe to the players. Then follow the consequences. Hp:20d8, which is related as “In LotFP terms that’s nearly godlike. Which is fine, because one Giant loose in your hometown should seem like a visit from an angry Jehovah.” And then a DR of -5, with two paragraphs of why. The why is not some bullshit ecology of the giants. Many adventures, or games, would go that route, trying to justify it. But it doesn’t NEED to be justified. You’re the DM. It’s that way because of a different reason. Because of the impact it will have on the players and the game and the way they will experience it through their characters. Jeff doesn’t say any of this explicitly, I don’t think, anywhere in the book, but its the core essence, I think, of what he says repeatedly. Break expectations. Break the rules. The rules don’t apply to the DM the way they do to the players. They don’t even apply to the NPC’s or monsters the way they do for the players. Always with the end-state goal in mind: be awesome and have fun.

As a result of this exposition (which goes on for damage and thrown boulders and so on) the length of text is larger. The boring old generic stats for the giants if about 1/6th of a page, and a digest page at that. The new stats take two pages. It’s not because they are dense, like some old 3.x or Pathfinder stat blocks might be. It’s because the philosophy and reasoning for doing what in the stats is explained. The DR section is two paragraphs. To describe “-5 points.” Clearly something else is going on here and that something else is the Reasons Why. Not the ecology. The reasons why you want to do this to promote gameable content and actions. Telling the players their blows bounce off. Watching the futility when you announce a roll of 6 barely scratches the surface. How to use the “ecology” of the monster to promote the vibe and gameable content. It’s ingrained in to every part of the stat block for the “new” giants.

And this happens over and over again for almost every part of the adventure. The giants here are centaur monsters with the lower half of elephants and the upper parts of sharks … because Rients. What are they, actually? You get four pages of options of what they could be, from Angels to Space Aliens to Mutants to shark-elephants, along with the consequences of those decisions. And the flying castle? Again you get four options on who could have built it,along with the consequences, theming, etc of those decisions. And then you get the section before all of this, where RIents is telling you that you should be doing this with ALL of your content. Awesome it ALL up … but just this one time he’s going to walk you through what “Making it awesome” looks like. The adventure and the How To are tightly bound.

I’ll cover the actual adventure briefly. Some half-shark/elephant giants in a floating sky castle are attacking villages. The characters get to track them down/their path, find a way to get to the castle, experience the sub-humans in the tunnels under the castle and the giants in the castle proper. Maybe twelve rooms in the castle and maybe twelve more in the tunnels under the castle. Motivations? Make one up. Someone got captured or the giants took something. Destruction path? Make something up. Witnesses. “What would this place/my campaign map look like if giants destroyed it.” The giants get brief personalities. They have some factions. The subhumans underneath represent another faction. The fortress proper represents the better parts of the style of G1. “Here’s the big place, there’s a lot of stuff going on, like a slave revolt, a lothario and so on. Go interact with it.” The giants move around a bit, and there are nice effects to this. The lead-in, with the village destruction, etc, communicates the vibe rather than specifics. Night attacks, the terror of huge shadowy things in the dark. Weird egg hatchings. Fire everywhere, screams, and so on. The vibe you’re going for is communicated well. The faction play is good. The “how to get your ass to the cloud” is good … because it has nothing in it except some advice on how to evaluate the crazy-ass plans the party will come up with. Crazy ass plans, and the disasters that ensue, are a chief component of D&D fun, IMO. The rooms in the castle have some control panels to fuck with , a crazy dead brain in a giant skull that’s not dead along with a body to play with, and are generally all quite wonderful. And you’re going to need a highlighter, notes, and a photocopier to get the most out of it. Even the most casual of readers of my blog should know by now that this style is not one I prefer. Given the teaching nature of the adventure I’m giving this some slack. Yes, everything IS awesome. And I still gotta run it at the table which means margin notes and a highlighter. Likewise, condensing a couple of tables on the giants, their interactions and personalities, in to one page for printing/photocopying would have made life easier on DM’s. I understand the dichotomy of explaining why and room description usability. But DO NOT PASS GO on condensing/including reference tables in a way easy for a DM to reproduce and use at the table.

The adventure is designed well, if a little abstracted and verbose because of the “how to” nature. The map encourages play, as to the factions and various elements. It might be the best primer thus far on running things by the seat of your pants in an OSR manner … if there is such a thing. “Here’s the basic set up. It’s written in a neutral fashion. A plot will develop as the party experiences the place. GO!”

It’s the holiday season. You could do a lot worse than buying this for your DM. It’s packed full of advice, examples, and how to’s.

Addendum: Jeff appears to live in Illinois. I suggest we all move to his town in Illinois so he can be our DM.