Stench of the Sea 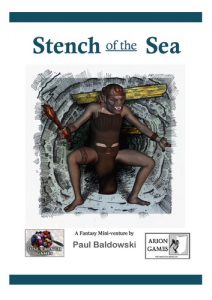 The adventurers probably come to Brinwan not expecting a great deal, and a first encounter with a mildly insane goat herder doesn’t change that expectation. However, just as the characters secure rooms and dinner for the night, something monstrous crawls from the sea and the matter of unexpected deaths in the local mine come to light – potentially leading them down the road to adventure.

This is a nigh incomprehensible adventure. 72 pages of endless text obscure a village, mine, trog games, dwarf tomb, and mermen outpost. There’s some decent reference material included but the core adventuring locations are just … I don’t know how to describe it. I’ve seen a lot of shitty layout and writing. Seldom have I seen something as bad as this.

The idea is that, while in a village, mermen riding giant crabs attack the beach. Except it’s a mistake, the mermen are actually trying to herd the crabs back in to the ocean to KEEP them from attacking the villagers. The bigot primary landowner then hires you to investigate the goings on in the mines. Disappearances, etc. Inside you find trogs (subhumans, instead of stinky lizards) and maybe an old dwarf tomb. Hooks are the usual “fetch me something from the village” (crab, in this case) or “someone has gone missing, go find them” … but includes “the tax collector has gone missing, go find him.” That’s interesting, but neither the ctab or taxman are mentioned again. That’s not too supportive. Seems like in 72 pages you could pay some lip service to “Harvey’s Crab Shak.”

The village has too much information, scattered in too many places. There’s free text describing things. There are reference sheets for the locations. There are reference sheets for the NPC’s. All told it’s scattered over a half dozen or more pages. That’s not a reference sheet. The intent here is good. The implementation is what’s lacking. The reference sheets manage to put 9 NPC’s on one page but only manages three businesses a page. If this were TIGHTLY edited then you’ve have a decent little village with some flavor, driven mostly by the interactions BETWEEN the villagers. Bob hates Mary and loves Fred. Except Bob is a racist and Mary is the boss of the miners union. Those things are great. The little quirks the NPC’s have are great. But it doesn’t stop at just two sentences. Instead it goes on and On and ON.

The adventure locales, proper, have the same problem. There’s some boring read-aloud and then an endless amount of text that obscures what you need to run the room. And it’s meaningless text. “King Kailesh fights to defend his people, pulling a ghostly replica of his maul from thin air. The spirit weapon functions just like the maul, a weapon of great power that mutters and sings in the dead King’s hand.” What is that add to the room? And that’s just two sentences on a page full of worthless information about the kings chamber, in the tomb. The history, what it was used for. Needlessly flowery language. None of this is relevant to the adventure at hand. And yet it’s there.

This is a basic adventure. There’s nothing too special about it, except maybe an above average village. But it’s ALL obscured by this mania to provide MORE information. Ya gotta know when to stop man.

6 Responses to Stench of the Sea