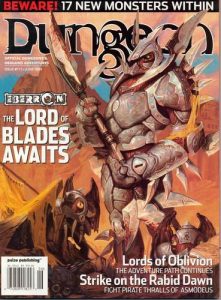 You know, these things wear on you but they are trivial to review. Linear, long stat blocks, nothing of substance.

Strike on the Rapid Dawn
By Frank Brunner
Level 15-17

This mini’s combat scenario is in three parts. First is the “hook”, a two combats at a lighthouse. The party is fetched there by the harbormaster because two drunk seaman say they are summoning a devil tonight on their ship. Arriving at the lighthouse has a couple of combats. On the way to the ship is another combat. The ship, proper, is a big dynamic combat affair with lots of elements to manage. +1 shock ballista manned by aquatic trolls, tumbling pirates on a heaving ship and heavy wind, a bugbear captain and a couple of ogre mages, with people leaping in the rigging and so on. There’s no adventure here, just a big combat on a ship.

What’s interesting is that there’s a small roleplay segment in the lighthouse, with a possessed worker. The text goes in to detail on it. It ends with an inevitable combat. On the way to the ship, if a boat is taken, some sahuagin immediately attack. But you can actually talk to them and negotiate, if you try. If someone tries to talk to you, they are treacherous. If they attack immediately, you can talk to them. The wrong lessons are being taught to the party.

I find the tactical mini’s aspect and rules mastery shit tedious and boring. I played a D&D encounters once in a game store in Indy, Saltaire Games. The dude running it usually played Warhammer. “No one can beat me!” he announced, as Dungeonmaster. – Kai, last of Brunned-G. The last of a race of romantic dreamers and warriors.

Adventure Path! oh no … Is this the last one? Please, let this be the last one … Oh god no. Three more. The party is fetched to fight their way in to a safe house to save a spy. Who is killed. Spoonfeeding the party information, they go visit a nobles house during an Evil Bad Guy dinner party. A massive fight with seven or eight complicated NPC’s/monsters then happens. More information is spoon fed to the party. “If they don’t get to listen to the speech then feed them information from documents found in the house.” They find a beholder dungeon under a different noble house. Fighting through it they find a beholder and kill it.

Pretext after pretext to force combat and “move the plot along”, which means fighting. The party has no chance to impact events. The beholder lair has some vertical shafts, circular rooms, and levitating effects, which is nice. I always thought that 2e splat book on beholders has a nice supplement, as was the mind flayer one. It’s too bad it’s all just pointless combat. This is not the way to do a plot based adventure. Scourge of the Demon Wolf, or even ENgland turn’d upside down, is the way you do plot. A sandbox, instead of a railroad.