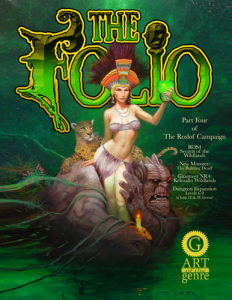 Once again, the players of the Ivory Scimitar are faced with going into Mithelvarn’s Dungeon as they race against time to help destroy the Violet Corruption. This time, however, they will be faced with a new challenge, that being the Infernal Machine’s ability to block the dungeon entrance to Level Five with a tangle of impenetrable fungal growth.

This thing (an issue? Something else?) has two dungeons, the first of which serves as the entranceway to the second. It’s duel stat’d for 1e and 5e. It suffers from railroaded encounters and two of the shittiest map of ALL time. At the same time, the map communicates more than most maps and actually serves to enhance the adventure, and the room descriptions and/or read-aloud are interesting. Or, rather, the imagery is. The actual encounters suck ass. Hard. They suck as hard. The DESIGN is shitty, the artistic elements (writing & art) are great.

This is volume four of some adventure path, and I’ve not seen the first three. Basically, you need to get down to level four of the dungeon, but it’s blocked with the infamous “regenerating fungus” nonsense. The party journeys overland to a backdoor entrance. The first dungeon has twelve rooms and is the backdoor entryway to the “core” dungeon level four, which has eighteen rooms. Got it?

Let’s start with the maps. They are terrible. And wonderful. And not in Gladarial way. There’s a page for each map in blue “OSR” style. Just rip that shit out and wipe your ass with it. There’s another page, each, showing the “real” maps. These are in DL1 isometric format, and in color. And wonderful. I’ve sometimes lamented that adventures don’t communicate more with their maps. Monsters. Light. Sound. Things like that. This does that. In spades. Rather than the icons normally found it has instead taken the path of “art piece.” Each room in the isometric format expanded, in color, to show height, features, and so on. This is nice, almost nice those Mock Man/Thompson walkthrough maps. The art of the maps adds a lot to the evocative nature of the rooms.

And in design and layout they are some of the most unoriginal maps I’ve seen. The entryway is a hallway with doors off to the side. As you walk past a door it automatically opens and the monster comes out to attack you. I am not shitting you. That’s the actual design. The main dungeon level you can imagine as a giant circular room, hundreds of feet in diameter. Along the wall are doors. Each door leads to a self-contained room. This is your adventure. Enjoy. Seriously. That’s it. It’s a pointless linear combat exercise with no reason to exist as an adventure.

I’ve covered that the actual encounters are crap. Just pointless combats. But the room descriptions are pretty decent. THE READ ALOUD IS ACTUALLY EVOCATIVE. I know. I’m stunned. Read aloud that actually does what it’s supposed to do, perhaps the rarest of all things.

I love mycenoid art. Here’s the read-aloud for room one “The reek of heavy sweat and musk hangs in the air as you open this door. Inside, two bulky humanoids, both with heavy broken chains dangling from their wrists, rise to meet the party. Each looks to ank the entrance, chains swinging in unison as though they’ve fought together many times.” We can quibble with the “as you open the door” shit, but two brutes with broken chain/manacles, swinging them in unison, is pretty boss. Room two is similar “The walls are scarred with deep scratches and the oor covered in feathers. At the rear of the chamber, amid a growth of violet fungus, a large winged creature lets out a terrible screech.” Room seven “This large and oddly shaped room is lled with huge square stones that are nearly as tall as the twenty-foot ceiling. These monoliths obscure the back of the chamber. Darkness lurks beyond the rst few and the sound of dripping water echos through the area.” Again, we can quibble with parts of these, but they do a decent job, especially in comparison to the crap we usually have to wade through, in conveying the feel and vibe of the room. Monoliths. Obscured vision. Darkness. Dripping. Echoes. Short. Evocative. Sets the mood well. Of course, that’s all irrelevant, since what follows in the DM notes is almost uniformly “[stat block] attacks!”

The creative parts of this are good. The DESIGN is terrible.

Some of the art has that playfulness that the older art style had, which is quite. Plus, lots of fungus pieces.