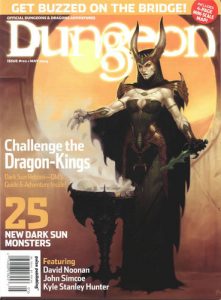 The Buzz in the Bridge
By John Simcoe
Level 3

Thisfifteen page adventure has the party getting rid of a giant bee hive that’s been built in a covered bridge near a halfling town. The adventure has, maybe, two encounters, or three if we count some roleplaying in the town. It’s amazing how Dungeon can stretch out a nothing adventure in to reams of paper. In spite of the volumes of pages, the adventure has some decent ideas. The halfling kids run to the party saying things like “We picked these flowers for you!”, along with some other guilt-trip shit. Perfect! The party is also NOT forced to fight the giant bees when they attack a local winery. Finally, how the party removes the bees from the covered bridge is not dictated. They are free to come up with whatever plan they wish … keeping in mind they’ve been admonished not to damage the bridge. The village has a nice little map overview which provides enough detail to run the village fairly well. The map just lists various businesses without the text going in to detail. The ACTUAL village text runs long, as one could expect a fifteen page adventure with two encounters to do. ALso, there’s no actual map of the winery or the bridge layout/hive. Well. Mostly. There’s an insert map of the bridge. It is four squares wide and 32 squares long. It’s clearly MEANT to be a tactical hack-fest, from the battle-map provided. Not being FORCED in to that makes this worthy of more than my usual diarrhea diatribe.

The majesty of Dark Sun reduced to crap. This is a kick off adventure for a Dark Sun campaign. The party starts off as rando’s at an outpost that’s been surrounded by elves and faces nightly elf attacks. The adventure starts at sunsset of the third day, after two nights of attacks. The randos are assigned to guard one section of the wall. Four “waves” of attackers come in, with a wave being defined as one or two attackers. The next night the randos are assigned to guard the inside of a warehouse, during a dust storm. Three waves of zombies attack. There’s your adventure! Welcome to Dark Sun! There IS a page of adventure seeds, for continuing the campaign, based on what the party does after the second attack. IE: some ideas on where the DM to take things based on what/how the party leaves the compound. Did I mention the NPC descriptions/stat blocks take ¾ of a page? Member when Dark Sun was good? Member?