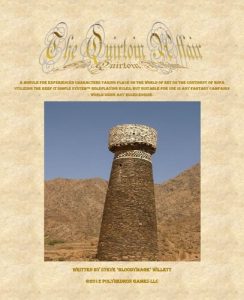 WoW! Seldom have I seen the likes!

This twenty page adventure is more like an outline of an adventure. And I’m being quite generous by using the word “outline.” The twenty pages have about eight-ish pages of content, single spaced single column with long paragraphs, with the rest of the adventure pages being a kind of monster manual for mostly “standard” monsters, like griffins and owlbears, but in the KISS system. Not only hard to read, but both overly abstracted AND very specific. This is more of a stream of consciousness “let me tell you about my character” story from a convention, except it’s “let me tell you about my adventure.”

I don’t even know where to begin. You’re hired by a guy who wants you look in to some abductions, which are suspected to be attributed to another kingdom. There’s not detail on them except “some press gangs.” That’s it. Nothing else, for the DM or players. You’re expected to go seek out sages in far away lands to learn about the other kingdom. There mountains of details about the Bloody Crag” and “The Sanguine Mage”, an offworld archmage/sage. This is the DM’s character, “Bloody Mage”, which is why his lair/fortress gets half a page of detail. Travel to the evil kingdom gets about half a page. The bulk of the adventure, taking place in the evil kingdom, gets one page. Here’s the sea “adventure:”

That’s your sea adventure. The details for the evil kingdom are likewise at this VERY high level. Vampire Bob is found in the capitol. The undead armies are found in pens. Three vampires guard the pens. If you kill Bob you must also kill the other three to keep one of them from taking his place of leadership. That’s not exactly word for word, but it’s pretty close. That’s the detail of the capitol of the evil kingdom and their undead armies. Everything is like that. Just the barest outline. There’s this emphasis on explaining travel routes and kingdoms, but no map to support it, meaning it comes off as a confusing mess, almost to the point of being incoherent.

This review makes me uncomfortable. The author passed away awhile ago. This feels like kicking a man while he’s down. This, and the next adventure popped up in my queue so I bought them, not making the connection. I’m going to review the next one also and then probably remove the rest of his adventures from my queue. There’s no value here, either in the adventure or in reviewing it.

3 Responses to The Quirtion Affair