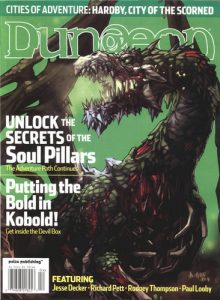 Secrets of the Soul Pillars
By Jesse Decker
Level 12

Adventure Path! Which is synonymous with linear adventure and forced combats! This starts with a forced combat; an assassination attempt. It moves to overly detailed text, another forced combat, a forced-combat assault on a temple and then a linear forced combat dungeon crawl. So, the usual shit show. Except this time the rooms have mountains of text about what they used to be and who used to live there and how they used to be used … none of which contributes to the adventure. This whole thing is just a Star Fleet Battles campaign, which, while fine for some people, is not the definition of D&D that I know and love.

CLose to a real adventure. The party stumbles upon an attacked wagon, with two kobolds looting it. They want to parley though, and have a letter from their chief. An injured merchant nearby indicates the attackers were imps, not the kobolds, which backs the kobolds story. They need to go to the nearby town and find a kobold in a sideshow so he can activate a coffin they have that traps devils. The town portion consist of the kobolds trying to stay disguised and getting in to trouble, and the party getting them out, during a masked sex festival in town while everyone looks for the sideshow kobold. Eventually the imps get wererats to attack the party and are tracked down to a building where the wererats, slaves, imps, and chained devils are holding up. Not as impossible as it may seem, since the coffin can trap devils. The setup is a little strained and relies on the time honoured fish out water monster in town trope. It’s not a bad outline for an adventure, but some more specifics of encounters with the kobolds and the sideshow or the festival would have been a better way to organize the adventure. Compared to the rest of the recent Dungeons, this is Lear.