The Stealer of Children 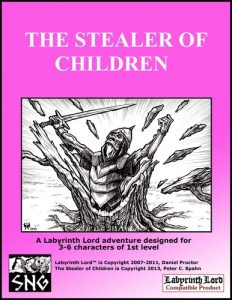 Leandras Row is a peaceful farming village that lies on the border of a mystical forest known as the Tanglewood. The villagers pay homage to St. Leandra the Lady of Blossoms and the village is famous for its ripe cherry orchards and religious festivals. When an ancient evil awakens and children start to disappear, the village is thrown into an uproar. Can the PCs enter a crumbling ruin, deal with the faerie creatures of the Tanglewood, and solve the mystery in time to stop the Stealer of Children?

This 31 page sandboxy adventure pits the party against a mystery in a village: children are going missing. It has a nice folklore vibe thing going on, and really does a decent job providing both some sticky encounters and, in places, an otherworldly vibe. It’s a great starting adventure that feel DESIGNED and only has a couple of organization places it could be improved upon.

Starting in medias res, a farmer is being chased down the road by a figure in a rusted knights armor. Saving him, the party find the body to be already dead. Back at the inn, the tale gets spread and rumors abound. That night, a child goes missing.

The party is, essentially, dumped in to this chaos, with events unfolding around them and NO assumption that they will do ANYTHING. I did type “saving him” above, but that’s not assumed. If they don’t then there’s a small section about what happens. And If they don’t follow up with the missing child there’s a small section about what happens. Otherwise, there are just places to visit and people to talk to. A full three pages of people in the back of the adventure for the party to interact with. And four or five locations to investigate, from a monastery to ruins to a couple of weirdo red herrings. There’s no assumptions of party activity here, although its pretty obvious what should happen, and the various parts and locales of the adventure have good ties between them. From the standard on the knight’s armor to a weathered inlay on a old bridge, to herbs in the monastery, there are connections that players that pay attention can take advantage of.

The folklore vibe of the adventure is pretty strong without it going off the rails in to lala land. There’s a magic acorn, an evil leprechaun-like fairy that steals the life force of children but keeps them in a nice bedroom in his vile hole in the ground. Evil little “maggots” that resemble the main villain, and a climax that has the party transforming in to children, via a potion, to combat the evil fairy. This is all supplemented by an “enchanted forest” that actually FEELS a little like a enhanced forest, a very rare thing indeed. Tree paths opening up, magical feasts, werebeasts transforming next to a stream, and other weird stuff like one giant boot. I like adventures with a basis in folklore; I think they prey on that almost ancestral memory we have of such things, and the good ones leverage that to create vibe in the DM and players. A jagged shard of glass with an image trapped inside, asking for release? Sign me up! [And no, I don’t believe in ancestral memories.]

Going back to my summation of the intro encounter, you can see how a rumor table gets integrated in the adventure. What better place than inn, right after something weird happens, for rumors to fly? And so much of the adventure is STICKY. At 31 pages it is a bit heavy on text but most of the adventure is pretty sticky; the encounters, like that intro one, stay with you, ar at least the platonic version of them do and that’s enough to run them.

There are only a couple of issues I have with this one. The motivation to get involved is really one of being a goody goody. It doesn’t force that on the party but it doesn’t really provide a motivation other than that. It’s pretty clear what the adventure is, and the players WOULD be tools if they didn’t follow up, but somehow integrating another motivation (other than “your related!” or some other nonsense) would have been cream. It’s also the case that some of the information gets lost in the wordiness. A lot of the locations are quite sticky but sometimes information is lost in the text. Important information. The best example is probably the information the nuns know, which is buried in paragraphs near the bullet-point rumors table. Some bolding, or bullets, in the nun section, for example, would help the DM much more readily pick out what they need.

These relatively minor quibbles though. This is a fine example of an adventure worth having. These solid adventures can sometimes be overshadowed by the gonzo or grim-dark, but are the workmanlike backbone of good supplements. Again, my highest compliments: meets expectations.

Ps: I really like that so many things in this village are called “cherry.” Cherry stream. Cherry stream bridge. Cherry groves, Cherry ale. Cherry Blossom Festival. There’s not so much as to make it silly, but there’s enough to make it silly if you so wish … and I do! “Yessir, we use genuine cherry hay for the beds! And the sheets are 400 count cherry thread!”

2 Responses to The Stealer of Children