The Lair of Largash the Lurid 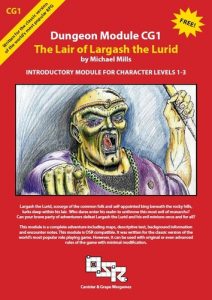 Largash the Lurid, scourge of the common folk and self-appointed king beneath the rocky hills, lurks deep within his lair. Who dares enter his realm to unthrone this most evil of monarchs? Can your brave party of adventurers defeat Largash the Lurid and his evil minions once and for all?

This is a twenty-one room eighteen page two-level dungeon. The first level is a former monastery taken over by humanoids while the second level are caves with random stuff in it. It’s plagued by too much read-aloud, overly detailed DM notes, and a writing styles that tells instead of whos. The catacombs have two particularly interesting encounters that, nonetheless, do not distract from the fight fight fight dungeon style.

The idea here is that the party stumbles upon a poorly worded sign advertising a “kingdom” nearby. Following up they find an old hidden monastery. This all happen in about a paragraph or two. What follows is about ten rooms on the first level populated by the usual mix of monster zoo humanoids. Some kobold entrance guards. A couple of goblin assistants, A few orc elite guards. The “king” ogre. A captured prisoner. The layout is a central corridor with a couple of rooms hanging out on either side and the “kings chambers” at the end. The second level has this similar, branching, layout, but in cave format.

The read aloud here can be extensive. Three paragraphs per room with the usual suspects being present: descriptions of how large the room is, far too specific descriptions, detail that adds nothing to the play. The read aloud for the second guard room stats there are kobolds sitting on benches, even though they may have responded to the fight in the FIRST guardroom and therefore not be present. I realize this is a bit pedantic, but it illustrates the issues with the too specific descriptions. The room dimensions are on the map. The monsters are generally dynamic. The extra words, generic and boring, add nothing to the imagination. Instead of focused feelings we get unfocused genericism. “This room evokes a sense of wonder of those who view it …” NO. No it does not. The text tells the players what they feel, which is NEVER a good thing. This is a classic example of telling instead of showing. Instead the room description should focus on evoking that sense of wonder in the players. Or, better yet, in the DM who can then transfer it to players. The adventure does this TELLING instead of SHOWING repeatedly.

The caverns underneath do have two more interesting encounters that differentiate them from the fight fight fight style of the first level. The first is a side cavern with a basilisk(!) in it. And laying in the middle of the floor is a petrified body. With a crystal amulet and a +1 sword, among other items. [Note: I usually play that they are turned to stone along with all possessions. The text implies the designer plays this different. To each his own.] This is quite interesting. The glow of the sword and/or amulet luring the party in to face the 6HD basilisk … these “temptation” encounters are classics and something I wish more adventures did. Playing the rope out and letting the party hang themselves is always fun. Likewise, later on there’s an encounter with a crystal golem of a strangely similar crystal … which should send the party once again back to the basilisk room to try their luck and get that crystal amulet … at least that’s how I would play this.