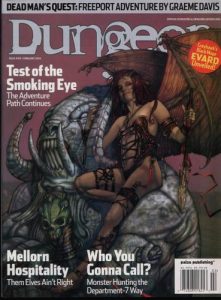 Hired to escort an elf to a magic fair, the party sees their ward runn of screaming in to the forest once they are there. Asshole elves have made a pact with a night hag for protection, and eventually hire the party to “take care of some nearby grimlocks in a cave.” The core of the adventure is a short thirteen room lair complex. There’s too much straight up combat/forced situations for my taste. I wish also that the magical fair had a table for NPC’s personalities, in order to give it some life other than a paragraph of pretext. But that’s not the era we’re in. ROLL FOR INIT! The lair map has a twisty cave complex, which is unusual to see, and has a nice side passage in it with a couple of scavengers. That, in particular, is something I’d like to see more. A little area, kind of hidden, with some challenge involved, with a SECRET in it. In the deep chasm under the bridge. Up the top of the underground waterfall, and so on.

Test of the SMoking Eye
By David Noonan
Level 10

Adventure Path! And there’s not much pretext to the adventure here. Or, rather, there is A LOT of pretext to justify what is a linear “tests” adventure. Lots of “challenges” strung together. There’s a lantern which shows the way, and hidden paths, which is a nice touch, as are the CONCEPTS for the demi-plan and giant skull you sometimes adventure in. Put the execution of those areas is really just “difficult terrain” or “-2 attack rolls” kind of stuff. And it doesn’t make up for the linear combats.

Deadman’s Quest: An Adventure in Freeport
By Graeme Davis
Level 1

Technically, I think this is a Polyhedron adventure. The party is attacked by “insane pirates” and then contacted by a ghost captain, urging them to retrieve stuff from a sunken ship to put things right. They do so, only to be led to a sahuagin lair, and then to a temple in Freeport to turn over the retrieved objects. Which are then promptly stolen and require a visit to a warehouse and cult temple underneath. Massive amounts of text and read-aloud all over a shitty shitty background image to ensure it’s all quite hard to read. The initial sunken ship explore is interesting because there’s no water breathing available immediately, so it’s dive after dive, which should make things interesting, and signs of a giant shark. The party eventually find some potions in the wreck which allows further exploration and them to hit the underwater lair. From this point there’s ANOTHER blast of massive text, and the warehouse part just feels like a pretext to do something in Freeport and is not very interesting. The ghost Captain hans around a bit during parts of the adventure, which allows for some great hamming it up, which I ALWAYS approve of. I wouldn’t say this is a good adventure, but the “diving on the wreck” and “ghost captain” are highlights and nice things to steal.