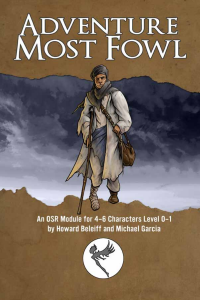 “Curses are like chickens; they always come home to roost”, and if these chickens aren’t found soon, the Village of Kith will be doomed! On the edge of the Four Counties, in a backwater village of lost souls, there is a string of robberies that cannot be explained…Farmer Phileas Filson has lost his chickens, or rather he swears that they’ve been pilfered, along with his prize-winning hen Mabel, and no one in town will lift a finger to help.

This is a very simple plot adventure that is absolutely ruined by the amount of text provided. A seven room cave complex takes fifteen pages to describe, with the rest of the adventure 48 pages being devoted to the nearby village. Decent monsters and a couple of interesting details are high points, but they can’t make up for the HUGE amount of filler.

Farmer Ted’s chickens are missing and he’s sure goblins did it. The party tracks the goblins to their lair, a seven room cave, and kills a bunch of goblins and giant chickens. That could almost be a 1-page adventure, or maybe 1-sheet at most. The first 26 pages give endless backstory and meaningless details about the village, expanded upon ad nauseum. Highlights include a long description of the blacksmith, which has absolutely nothing unusual going on, as well as the jail, which has absolutely nothing going on. The inn has a gossip, and a page of rumors, but again it devotes a significant word count to descriptions of the mundane and ordinary. An example of a different type is the carpenter, who is secretly a wizard. There’s nothing to this. No secrets. No big plot. He’s just a woodworker who is secretly a wizard. I guess that’s a decent little bit of backstory/flavor, but not worth devoting the page count to.

That’s the primary issue with this adventure. The word count, which turns in to page count, doesn’t actually enhance the play of the game. That’s the problem with backstory and “mundane” descriptions. History is generally not relevant. It CAN be. It can also be provided in such a way that it doesn’t get in the way. For example, there’s pages here related to ancient history. You can just yank them out and ignore the entire thing without impacting the adventure. But when it’s mixed in to a room key then you’re making it harder for the DM to actually run the game. The DM must wade through the irrelevant backstory, history, and detail in order to get what they need to run the room. This extends even to a pit trap, which takes a page to describe. Here’s a standout sentence, prime for a removal during an edit: “If the characters open a door (or both), they see the following:” What’s the point of that? It’s filler.

Complicating that, in this adventure, is the read aloud. It’s long, lengthy, and is NO way set apart from the DM text. Imagine, if you will, that the first paragraph, above, was all read aloud and the text below it was not. There’s nothing to distinguish or offset or lead the eye. And the read aloud DOES tend to be lengthy also … while adding little to nothing to an evocative environment.

There’s a plot here, and because of that the combat feels like plot combat. It doesn’t feel like you encounter a room with giant chickens and some goblins. It feels like “here a combat room for you to encounter.” That feels out of place in an OSR adventure, especially a Swords & Wizardry one. But then again maybe that’s me bringing my own prejudices to the thing. Forced combat situations in OSR stuff feels wrong. Maybe it’s the writing style here. idk

There is a detail or two that stand out. One cave room is two levels, with wooden boards running as a ramp between the two, and goblin babies sleeping under them so as to not get trampled. That’s good. Of course, they are not there during the read aloud, instead hiding behind a rock. Bad detail, because it’s not used, but a good idea. Likewise a couple of the NPC’s have a detail or two to them that is interesting. Hidden in a page long description. A store owner with lots of mistresses. A happy farmer whose daughters were all fathered by a Satyr. Nice. The goblins are “new type”, with weirdness to them, like feathers and causing gibbering tongues. The chickens are giant and can blink. Both of these are great details.

I’m convinced that this could be edited WAY back, to just two pages, with reference sheets for the NPC’s and descriptions that focus on the interesting, unique, and evocative. THAT would be interesting, and worth the same amount as this thing cost at Drivethru.

3 Responses to Adventure Most Fowl