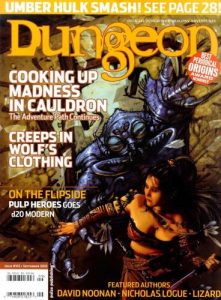 The core concept here is good, but it’s lacking quite a bit to push it over the top. A wolf is near and the village organizes an attempt to stop it, including a rumored poacher and a hunter who hates wolves. Nice hooks, including “curry favor” and “rivalry with the poacher/hunter”, both of which are more personal and appeal to the meta-game of the players running their characters. “Fuck no we’re not going to let that tool hunter get the goods!” One of the big scenes is in a bazaar and there’s a nice table of chaos that can happen in the bazaar, from an alchemist’s tent to a bbq vendor with coals and skewers. What it’s lacking is a few more scenes with the poacher and hunter to build up the rivalry more. It also suffers from “random humanoid syndrome”, where hobgoblins are hired by the poacher instead of just using human thugs. FInally, the last part of the adventure hinges on the party NOT killing the wolf. That may be too much. This reminds me a bit of a REALLY watered down version of “Gone FIshin”