The Cruellest Mistress of All 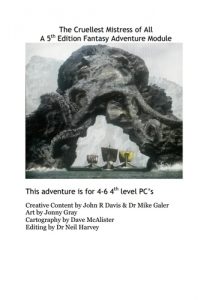 A frustratingly organized sixty-five multi-part adventure, which is in turn part of a campaign arc. A divination, followed by an unrelated orc attack on the town, followed by a tower exploration, followed by a journey to an orc bandit outpost. The first and third parts are related are are the second and fourth, but there doesn’t seem to be any relation between all four. This adventure shines here and there but is plagued by VERY weak connections between the sections and an organization style that is too complicated. It does a decent job with the monsters and treasure. It’s not a shitty adventure. There is something inside trying to get out, but it can’t lift the lid of its own (heavy) problems.

This is supposed to have four parts, with two significant appendixes to help support the adventure. In part one you receive some divinations about the location of a tower. That’s it. “A fearful future may unfold” is about as much motivation as you’ve got to pursue the towers location. You see, you’ve been summoned to a priest who has heard about you and he gives you the divination. Or, if you played part one, you sought the priest out? To get some items you found ID’d? The entire hook here is bizarre and neither thought out or presented clearly. It’s literally pretty much “you get summoned to the priest and he shows you a picture of a place.” It’s just bizarre.

Then, suddenly, the town is attacked by orc pirates. An entire mini-game, ala 4e, unfolds as you try to beat back the hordes through a series of mini–games, earning Victory Points. It’s a kind of abstracted town attack that is generally well done/ It tries, at one point, to even offer pointers to mass combat rules, but then doesn’t support those rules. “You could set up your own mass combat.” Great. Thanks. I thought I was paying you for that help? I can understand wanting to support multiple systems, the OSR having many moving parts, but far better to just pick one and lay out the two sides for the DM rather than just point them, with no support at some rule sets. The rest of this section is a bit bland, but ok. There’s not a lot of “orcs burning things down” or “two orcs beating a man and his family senseless with ripped off legs” and more “three orcs attack” or “eight orcs fire arrows.” Just as in Hoard of the Dragon Queen, a few specific examples would have been better than the mostly abstracted combats and encounters presented. There are, of course, non-combat encounters. You can rally the troops, heal the dying, and so forth, all to earn points towards a victory for the town.

Next is the disconnected visit to the ruined tower. Inside is a decent little dungeon with a nice variety of encounters. Puzzles, traps, hints, things you can talk to. Then, you suddenly find yourself on the high seas journeying to the orc raider stronghold. Once there you meet the leaders and then go in to their “death pits”, either by choice or not, and explore the little mini-dungeon. Once out you visit their shamans island, kill the evil shaman imposter, and end the adventure.

This thing is ALL over the place, with the parts not really connected much at all. In particular, the motivation to check out the tower is essentially nonexistent. The same pretty much holds true with the orc sea journey. “Oh, some of the orcs have a tattoo” and “it looks like that orc is a doppelganger!” is about the extent of the motivation. There is some pretext to “returning the orc bodies/totems to their homelands/comrades”, but is that really something folks will be up to right after a raid? It’s just all strung together VERY loosely. The details provided in these non-dungeon portions (the divination & orc leaders, in particular) is quite weird. There’s exposition on history and events in the past but very little for the DM to work with NOW. The orc tribal meeting hall, in particular, is a lost opportunity. Instead of factions and personalities and little vignettes, it’s just ¾ of a page of description. There’s enough in what’s provided to build on, but it’s going to require work … and I’d prefer the designer do the heavy lifting.

The two little dungeons are pretty decent. Wordy, with exposition, but the core of each is ok. Paintings with secret doors behind them. Clues in murals to secrets and boons. Monsters you can talk to and treasure that is more than just a +1 sword. In particular, this series has a a little section for the monsters with a Personality/Quirk and Motivation/Goal. Even the monsters with “they attack” have enough in this section to help the DM out. The owlbears hoot & roar and, angry at their confinement, want to escape and slaughter orcs. The hydra hisses at its own heads. The tigers enjoy the hunt/kill. The medusa is cautious/weary and is just trying to get by. These sections provide the same kind of cues that the “wandering motivations” table, that I’m so fond of, also provides. It’s just a little bit more extra for the DM to build the encounter off of.

Of special mention is the townfolk listed in the appendix. They also have the motivation/quirk thing going on, a small backstory, and a secret and a boon for the party. It’s a bit wordy, and a summary page would have been good for running them at the table, but it’s the kind of stuff that can really make a recurring NPC come alive in interactions with the party.

This needs a good edit and better ties between the sections. (I still have no idea how the tower & divination ties to the orcs.) If those could be taken care of, and a bit more added to the orc diplomacy section, then you’d have a halfway decent adventure.