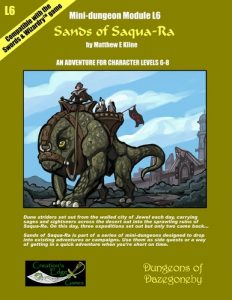 Dune striders set out from the walled city of Jewel each day, carrying sages and sightseers across the desert out into the sprawling ruins of Saqua-Ra. On this day, three expeditions set out but only two came back…

This is a little nine room symmetrical dungeon inside of an old pyramid, complete with shifting sand and mummy. A little wordy for it’s length, it’s fairly inoffensive and straightforward.

A tour group has disappeared while visiting some nearby ruins, after a sandstorm came up. You’re hired to bring em back. AT the ruins you find a newly opened passage, cleared of sand by the recent storm. Inside is a tomb, a mummy, and a curse that can be lifted to restore the tour group from their sand-shapes to their true forms.

This claims to be a mini-dungeon … and that’s certainly true. There’s just not much here to work with, either in quantity or interest. Each of the nine rooms does have something going on. Generally that something is a bit … bland? Or, maybe, blandly presented? There’s certainly room in most adventures for being more clear, but not at the expense of giving the DM something to work with. To be sure, more words are not better; it’s generally DIFFERENT words that we’re looking for. The first room is a great example of this. “… a raised alcove where a statue stands. The statue’s arms are crossed in an X over its chest. There’s a body lying face down at the bottom of the steps.” That’s the read-aloud. The room goes on to say that the statue is in the likeness of the queen and what’s under the body. The read-aloud and DM text needs more adjectives & adverbs. The text is expanded upon, but not in a way that is generally useful to the DM in running the room. Wordy, and more than a little generic and bland.

Certainly there are bits and pieces that are better. The second romo has clay jars filled with ash and bone bits and a trinket or two. A mace and scythe in room one have silver blades and an ornate gold handle studded with gemstones or a head of a large piece of red quartz. But these are the goodies in the room, not the room proper.

One of the traps has a statue on a large copper plate, according to the read-aloud. I might have instead used “metal plate” and then informed the party it was copper when they asked, but that’s mostly a quibble. Instead, it’s a hint of a trap to come, something that far too many adventures don’t provide. Cues from the read-aloud or DM are critical in this regard.

Not much to a review for not much to an adventure. It’s organized fairly well. Has some decent, if bland, encounters, and is short enough to run through in a single night. This sort of expanded upon minimalism, that keeps the generic, is not for me. I wish it took some extra time to go through another edit to make the room descriptions, and creatures, more evocative.