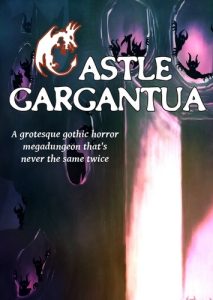 “Ride the beanstalk and crawl into the sprawling halls of Castle Gargantua. There awaits the most legendary of giants and the fiercest creatures known to man. Delve further than ever for the great doors of Castle Gargantua have swung open once again, and what lies ahead isn’t for the faint-hearted.”

This is a build-it-yourself atmospheric megadungeon toolkit/outline. As with Lapis Observatory, this adventure is trying out some new/old things and, like Lapis, if you are at all interested in design then you should pick this up. For everyone else, this presents a poser. You are going to have to put some work into prep this dungeon. More than a simple read through, you’ll need to roll dice a few gazillion times, either before play or during play, to create the dungeon as you go along. Is there an encounter in this room? An ‘empty’ room, just a treasure … how many exits … You’ll create it as you go. Spicing things up are a series of special dungeon areas, premade little areas to toss in. It is, in essence, a version of the random tables found in the back of the 1E DMG used to create a dungeon … but more focused and definitely not generic.

I’m going to need to cover the design mechanic first. This is a toolkit. It’s focused, unlike many toolkits, but it’s still a toolkit. The core map is a 5×7 grid of squares, each color coded in one of five colors. Each color represents one area of the castle, and each square representing, in an abstract way, 4 to 8 rooms. The DM generates these rooms on the fly or a little ahead of time. Once the rooms in the “big square” are explored (4 to 8, depending on how big the DM wants the castle/adventure to be) then the room exits will take you to the next colored square. Each of the colored sections has a list of rooms you can pick from, and mark off, once used. Morgue, butchery, cold room, barracks, guardroom, crevasse, and a couple of dozen others are exampls from the “blood” section of the dungeon. From there a d4 tells you how many exits and what type. A d6 tell you how big and what shape the room is. A d8 tells you what’s in the room, with four of them being “empty” in the Blood section. A d10 indicates what kind of treasure, if one is called for, and a d12 indicates what kind of monster if one is called for. Finally a d20 indicates atmospheric details. There’s another small table that indicates how far away the next room, down a corridor, the door opening in to it, etc. The monsters & magic are all unique and interesting, as they should be.

An example here might be two broken wooden doors as exits, in an octagonal room 60’ per side, with a bloodstone megalith in it, and the clamor of a distant battle. I’m going to randomly pick “battlefield” off of the list of room types. As a DM, I imagine this monolith type thing jutting into the room from the floor in a corner at an angle, blood red pulsing veins on it, Bodies of various ages and condition all around it suffering brutal wounds, one of the door it a makeshift barricade of wood and bodies piled in front of it … maybe the one the party comes in through. And the “sounds of distant battle” are the creams of agony from someone just having been killed in the room, the last person, when the party is travelling down the corridor to get there. That’s what the tables are supposed to do, they are supposed to spur your imagination and allow the DM to fill in the details with their racing imaginations. Some of you may recognize that this is exactly what I think an adventure SHOULD do. Minimal details, but enough of an Idea Seed to get the DM’s juices going. The “gold” rooms, seven or so provided, are prebuilt little areas of a couple of pages that represent a more traditional format.

The entire thing is level neutral because the creatures scale with the party. HD-party average, and so on. In addition there are quick systems for determining if they are normal sized or huge, and easily scaling up damage, etc.

The entire thing appears to work fairly well in practice. It’s pretty easy to roll a bunch of dice at once to generate a room. I’m not SUPER thrilled with the tables spreading out over two pages, but maybe I’m just being a picky git. The monsters and magic items and theming of the areas and atmospheric effects/window dressing are all suitably interesting and work well enough together to create the little narratives that can allow for a minimal keying. There’s a nice set of reference tables in the back to allow the DM’s rolls to be recorded at the time of play, or maybe even a little ahead of it.

You’re gonna need to read the monsters and traps and weirdness ahead of time and maybe highlight them a bit; they do get a bit “long paragraph”, but I guess that’s to be expected for weirdness. Once you’re through once and hit it with some yellow then you should be good to run on the fly.

It’s an interesting idea. A kind of mix between a preparing a dungeon ahead of time, minimally, and running something on the fly.