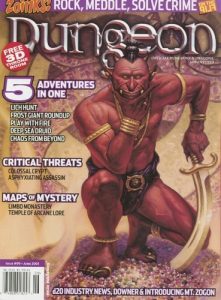 The very definition of a lame adventure/the perfect example of a ‘Combat as Sport’ adventure. It’s just a bunch of forced combats held together by a pretext. Evil cleric of Nerull disguises himself and casts undetectable alignment so the party will go get four pieces of a key that defeats a newly awakened chaos creature. He’s not lying, so the disguise and alignment spell just reinforce the lameness of the inevitable betrayal (and he does! Wow, couldn’t see that coming …) You go in a shrine that you can’t passwall, teleport, ddor, etc and answer four riddles, each teleporting you a different location. There you fight three of four encounters to get part of the key. You then go fight the chaos monster. There’s one possibility to negotiate with someone, but that’s it. Just forced combat after forced combat. The whole mindlessly rolling dice in combat thing eludes me. If you like it then good for you, you would like this adventure. I just wish your game didn’t have the same name as my game, mostly so that I didn’t have to wade through your dreck to find my dreck. IE: the story of my blog.

More interesting than the usual Dungeon fare. Some Locath have moved into the town mill and the party is encouraged by the town to do something about it. An assault OR negotiation (I know, right?!) gets the story that the locaths old encampment, a flooded village, has been taken over. Going there the party discovers a locath ghost who tricks them into going into a small dungeon under the town. Inside THAT is a kobold vampire and a trapped water elemental. The locales in this are a little more interesting than the normal boring fare, and the creatures all seem to have some motivations.The ending is not as simple as just killing everything and ferreting out the “mystery” and the intersecting goals is a large byproduct of the adventure. It’s not quite a faction adventure but it does have a mystery to solve (if convoluted) or you can just blunder through and come out the other side with more unhappy creatures than happy ones. I wish this would get a stronger formatting and the intersecting goals worked out a little more, that would bring those to the players minds in a much more frontal fashion, keeping them there to ponder the consequences of their actions. As it is, the DM is going to have to recognize this element and work harder at it.