The Craft Dungeon of Reynaldo Lazendry 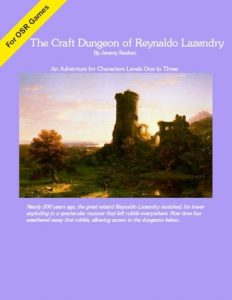 Nearly 200 years ago, the great wizard Reynaldo Lazendry vanished, his tower exploding in a spectacular manner that left rubble everywhere. Now time has weathered away that rubble, allowing access to the dungeons below …

The thirty pages in this adventure describe a seventy or so room wizard’s dungeon (in about fifteen pages) and then also has some village descriptions for a potential homebase. This level has a ‘hobby’ theme, with rooms devoted to theater, sculpting, wargaming, etc, and several more levels promised. The entire thing might be described as … vanilla fantasy, but not the straightforward dreck that clogs up the product shelves.

The closest comparisons I can make to this are either with Shadowbrook Manor or Many Gates of the Gann. In both cases those two products skew either more silly than this adventure (Shadowbrook) or slightly more weird (Gann.) We get a nice large and moderately complex map, as one would expect for a dungeon level with seventy rooms on it, closer to Gann than Shadowbrook. The encounters in all three have a more non-generic vibe to them than “12 orcs in a room.” There are levers to pull and mysteries to be solved and mini-quests to go in the dungeon. These are great because they get the party moving and give them mini-goals to pursue. Gotta find them all, when it comes to books, or, after finding a statue, you can haul it back to the de-statueizer machine. Some of the denizens can give you tasks to accomplish. A handful of the evil creatures don’t even attack you when you free them and/or will show up more as continuing plot developments. For example, if you free the succubus she keeps an eye on the party in future adventures and may even help them out … all because of an evil plot, but, whatever, it’s a nice result that’s a shit ton more fun than “she attacks when freed.” And the goal, of course, is fun. There’s talking food and a dead dwarf in the fridge and paintings you can fuck with to either free or trap creatures. These are the high points of the adventure, along with a decent variety of slightly non-standard magic items, like a magic sword that spews blood everywhere (a stage prop) or magic soldiers and so on. Lemure’s, possessing marionettes, is a nice touch also and reminds me of the polymorphing pumpkin-head devils from the best of the Dragonsfoot adventures.

The writing here is not really going to inspire much at all. There are some exceptions, like the dwarf body falling out of the fridge and so on, but the actual writing is a little flat. It’s quite business like and gets the job done but it doesn’t generally excite you to run the room. There is also sometimes a tendency to mention the mundane. The kitchen gets a brief description of it’s contents and where the plates are .. which is mostly meaningless. The sculpture workshop likewise get a short description of what tools are present. The workshop I could give a pass to but the kitchen description, and a few others, stick out as unnecessary. There’s also a few bits of flavor text that feels out of place. Nice, but … distracting? One room has a chair that falls off a table when the party enters. That’s great background, but reminds me a bit of the chess room in Dwimmermount … it’s not really interactive and it falls on the DM to ensure the party doesn’t get tunnel vision and still maintain the creepy flavor.

There’s some mention up front of some Lovecraftian theming of the wizard, proper, but that doesn’t really come across in level one of the his home. “Chanel Pits” and “Flesh Vats”, the names of the promised levels two and three, sound much more productive in that area. Overall the effort here is a little flat. I don’t mean to imply bad, but there were just very few things in the dungeon that the writing made me excited about running. There’s a decent number of interactions to be had and little bits of puzzle and interconnectedness scattered around that are great, but, still, come off with a generic flavor.