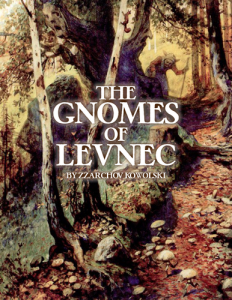 …There are older things in these forests too; the knights did not just battle the pagan kings of man but also the forest dwellers; the wodewose. Spend too long in any tavern or listen to a village alewife and you’ll hear stories of knights and wodewose duking it out in little patches of now cleared pastures. One of these little villages is the village of Levnec, a sad little town ruled by a self appointed lord banished from his seaside villa far to the south. His name is Lord Kristoph and he has been looking to hire some transient sell swords to solve his problem. Some of the townsfolk are (repeatedly) going missing and others are refusing to work, even after examples were beaten and hobbled by his men. Seeing as the townsfolk are blaming the local Gnomes, he would simply like these drifters to saunter in the wood, murder some Gnomes and bring them back to show the townsfolk there is nothing to fear (except him) and to get back to work.

I wonder how many of my reviews are tainted by first impressions? There’s a wilderness map in this. Most of the page is covered with trees. There are are a few places annotated: Coven Temple, Strange Meteor, Here Be Gnomes, Dragon’s Den. I have no idea why, but this map sold me without looking at another page of the adventure.

That little publisher’s blurb is from the intro and man does it ever set the scene. Except it doesn’t. This thing is even more wonderful than that bad-ass intro implies. This is a pretty lightweight outline of an adventure. I have no idea where the twenty pages come from. Everything seems simple and is VERY sticky. This is very much the kind of adventure that you can read once and then run the entire thing from memory. There’s a decent number of elements mixed in, each of which gets a very brief outline and then it’s up to the DM to do the rest. One more page, of specific ideas, would have put this thing over the top.

The intro does a good job of laying things out in a colorful but terse manner. The village gets two short paragraphs. There are five or six places people/places presented with description for the village. A blacksmith, church, the “manor”, a couple more. They all have something to do with The Thing that’s going on in the village, alluded to in that intro. At about a paragraph each. They do a good job of focusing on what’s important. For example, the empty church focuses on what the party can steal and what the villagers do to prevent that. For the most part it’s just a general impression and then a sentence or two on how it related to mystery. This gets back to the core purpose of a product: to be a play aid for the DM. The descriptions here focus on the substance of that and ignores trivia. Exactly how it should.

To the brutal lord and the core mystery we add: a dragon in the woods, a bunch of woodwose who love human flesh, the gnomes proper, a pagan cult, and, perhaps my favorite: Gargamel. Yes, Gargamel is in this adventure. And he’s WONDERFUL. His name is Mel. He lives with his cat in a collapsing tower. He’s an alchemist. He loves the taste of gnome. “He’ll show those fools in town who is crazy now!” Which leads us to the gnomes: they are the smurfs. A twisted version, but smurfs nonetheless. Except they LIKE it when people eat them. It’s how they reproduce.

This thing is the definition of a sandbox adventure. It gives you a few places, briefly described at a page or so each, and adds some motivations along with five or six different things going on. They all have some tangential relation to each other but whatever pretext the party is summoned for ends up not being what is actually going on. It’s a mystery in that the initial presentation of events is not what is actually going on and the party, poking their noses in to things, explores the environment and goings on.

There’s a decent amount of treasure, most in coin form with a few exceptions here and there. One, in particular, stands out: the mummy head. You can find a mummy head with it’s mouth sewn shut. If you cut open its mouth it whispers a spell to you. Fuck yeah! Fuck your boring old scroll! Further, the spell is Summon Dragon. Yeah, and it’s first level. A dragon flies to where you are, in real time. And you don’t control it. Straight outta Call of Cthulhu or LotFP! I love it!

There’s a pretty good random wandering table for exploring the forest. It uses a series of dice rolls to create some encounters. WHere do have the encounter. What to encounter. What’s special out it. Etc. It’s a nice way to present some variety in wanderers, and motivations, as I’ve harped on several times before. You meet hunters. There’s a pig on another table. Ah! You meet the hunters chasing the pig! It’s a good way to spark the DM’s imagination and it works well here.

If I had a complaint/ask it would be about a little more … specificity? In color for the locations and NPC’s. A very good and evocative general overview is provided but I think a little more local color would have added a lot more to the adventure. The village, for example, comes off as a little one-dimensional. I can imagine something like one additional page of content, a summary sheet, with a d6 “color” for each location or person. The village table might include something like “local rabble rousing against lord” or “guards putting the beatdown on a small child” or something like that. Likewise the gnome village. Fishing tourney in outhouse” or some other SMurf like thing. In other words, I think it needs just a little more to ground the adventure in the DM and party and/or maybe give a shove in certain in certain directions.

I’m a fan of this though. I will sometimes say a product is pretty close to my cutoff line, either pro or con. Not this one. This one is very clearly over the line in the “Keeper/Good” category and is one of the clearest examples of something that it clearly decent but could use just a bit more help to kick it into superstar territory.

2 Responses to The Gnomes of Levnec