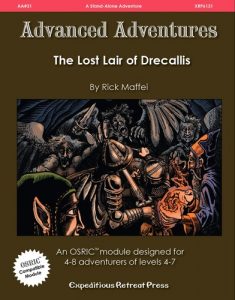 For a second year in a row, Drecallis has not appeared on the appointed day to collect her tribute from the people of Longridge. Is the terrible beast dead? Or has the great reptile departed for greener pastures? The elders are desperate to discover the truth, and if the dragon is indeed dead, a priceless hoard may be sitting in the dragon’s lair, unguarded. A call has been put out for brave souls willing to seek out the remote lair of Drecallis and investigate!

This is a thirty-ish room cave complex with a good variety of creatures crawling about. It has a vanilla slant to it, although a decent variety of vanilla with several touches of classic D&D. The text is long on words and short on interesting.

You might think of the complex map as a kind of star shape. Each of the legs has an entrance in it, with a common convergence areas/no-man’s land in the middle. Trogs in one arm, gnolls in another, vermin-ish stuff is another, and a behir in the last leg (the old dragon lair proper.) There’s conflict here between the three main groups, but not full on faction play. Everyone is hostile in spite of their problems, with on the behir willing to talk, at a low probability and only under certain circumstances. This is an opportunity lost for faction play, although the generally linear nature of the “legs” of the map make interesting faction play/exploration hard to pull off on a map like this.

It’s hard for me to find the words to describe the dungeon. I want to say “boring”, but I think instead the writing is quite flat. A spider in a hole, trogs torturing a gnoll, a crayfish attack … there’s a lof of classic and, in an academic sense, interesting potential to the encounters. But the writing style here just puts you to sleep. It takes a lot of text to get where it’s going. It’s almost as if the entire thing is written in an “aside” kind of style, but more of an academic footnote than a nudge nudge wink wink kind of aside. There are these descriptions about the hows and why of things, the motivations and in places irrelevant detail. None of it really adds to the encounter the DM will be running. “A box of assorted tubers.” Oh. Ok. Thanks. “Two tuns filled with rainwater.”

Everything here is a bit … crufty. The magic items and the other mundane treasures just don’t get much here. A +2 ring. +1 swords. The variety turns up a bit when you get to the hidden treasure of the dead dragon. Paragraphs on a lamia deception. Paragraphs on a doppleganger deception. But very little in the way of making it INTERESTING.

And that’s a shame. The variety here is well done. Very little in this adventure feels forced at all. Everything fits together without pushing it at all. There’s a lot of decent little set ups, like the skeleton in the water, or the spider in the hole. Or, even, the POTENTIAL for faction play. Dead NPC parties, and a banshee bitter from her abandonment. Harpies in their filth ridden lair. It should be great. Instead it’s flat.