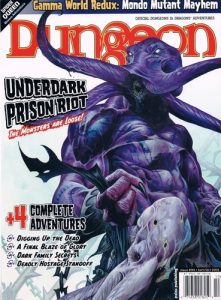 A simple dungeon-crawl with betrayal at the end. My life is a living fucking hell. MASSIVE read alouds. Almost seven full pages before room one. Irrelevant maps. A wall of force that can be raised or lowered at will so the baddie can monologue. The dude who hires you “watches your progress with magic” and then betrays you. Perhaps the definition of Wall of Text. Even though this has line breaks it has more Wall of Text than the people who don’t know what a line break is. Line after line of irrelevant detail clogging the thing up. Formatting to make a reader weep (which, in the designers defense, may be a Dungeon Magazine issue.) One room tells us there is a keyhole on both sides of the door. This is really nothing more than an expanded lair dungeon with nothing interesting going on in it. Just mundanity: Traps & combats, both boring.

Still reading? How about we have a contest and everyone tries to rewrite the following. I’ll give the winner some prize.
“The room is empty, but careful searching might benefit the PC’s. The far left corner of the room at one point has a wooden shelf; a successful Search check (DC 20) allows a character to find four holes bored into the stone in this location. The holes held pegs that supported the shelf and are arranged in a horizontal line, about a foot apart from each other and 5 feet off the ground. They are each a little wider than a thumb and extend into the wall almost a foot and a half. There is a secret compartment being what used to be the shelf. A successful Search check (DC 22) allows a character to discover the release mechanism: simultaneously pressing two small catches located in the two opposite holes. Two stone blocks slide apart, revealing a shallow alcove (1 foor deep, 1 foot high, and 2 feet long) Inside is the TREASURE.”

Note: the treasure is not the Hand of Vecna, but just three potions.

Escort an old knight in a forest for the last hunting trip of his life. Nine pages for five encounters: the soul of brevity. It’s just five scene based encounters. The only interesting one, in any way, is an encounter with a neighboring lord who accuses the knight of poaching. There’s just nothing here. A few set piece combats? Is that what THE FANTASTIC has come to?

A side-trek fighting a dretch and some ghouls in ruins.

Worms in the Exchequery
By Frank Brunner
3e
Level 15

The party is sent into the treasury to find some thieves inside. This is a stupid fucking adventure that is absolutely wonderful in the world it builds. Planescape, Vornheim, ASE1/Towers … “The Royal Halberdiers of the Reticulated Castellan” and “Attend, sors, the excises therein are for the public dikes and flood season draws nigh!” WONDERFUL! “You can’t just leave my husband trapped in there like common riffraff. What is a portal to the Hells has opened? The Hells are for commoners, not nobles!” Wonderful NPC rumors, all in the same vein as the above. There’s some bullshit around keeping divination magic from working. Otherwise, this is just a short six room adventure with a couple of combat, including the finale with some shadowdancer thieves. The beginning is definitely the best part, with the adventure proper being a major come down from there.

A joyless adventure putting the characters in the middle of an escape attempt at a prison for mind flayers. Forced combat after forced combat on a map that is almost completely linear. TO get the players to divert to the prison there’s a column of text explaining a cave-in and how each different way around (spells, mostly) will fail. Airtight doors. SIgils and magic tattoos every to ensure the mind flayers don’t escape. Bodak guards who avert their gaze for the prison staff. A door that summons a gelugon every time someone crosses the threshold. A double cross from a prisoner. (No double crosses! Fuck it’s tiresome! SOMEONE has to not double cross the party or the party will never trust ANYONE, and the roleplay with evil monsters allied is much more fun than Just Another Stinking Combat.) Set piece combats. Forced situations. It’s like adventure design has devolved into some weird exercise in which the DM uses the rules to nerf the party and build a monster via kits that can defeat them. The emperor has no clothes!