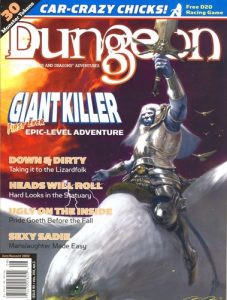 Fun fact. I pulled the next Dungeon off the pile, looked at the cover and thought. “Fuck! Another Gith adventure?!!? And on a magic carpet?” Then I noticed I had a dup of issue 92. I would like to change my answer to “Fuck! Another adventure about melodramatic storm giants?!”

A pretty classic Dungeon Magazine: seven rooms in ten pages. It accomplishes this by spending a decent amount of time telling us what each room used to be used for, in detail. This, of course, adds nothing to the adventure. Several hooks are presented for this lair/tomb, one of which, a boring “you see reward posters” is expanded upon greatly. Two others are more action oriented, with the party either ambushed by four bugbears or seeing the end of a caravan ambushed. The track back leads to the complex, with a few rooms of bugbears and an ogre. A chimera (who never needs to eat .. sigh… ) guards a tomb room with a spectre. The concept of the tomb room add-on is nice, but I don’t think it really comes across as the add-on it should be. It comes off more of a paste-in than a natural part of the adventure. The entrance is a nice set piece defensive work to get past, and once that’s over the adventure one trick pony is done.

Side-trek is a medusa gallery/cave in the underdark. The medusa wears a hat of disguise and an amulet that makes her look like a statue. She has a pert mimc, phasm, and vargouilles. I always throw up a little in my mouth when I see a hat of disguise in an adventure. It’s almost always paired with some mind-protecting magic item, so the statue amulet was a surprise.

This is the usual “dragon is actually good and the princess is the bad guy” adventure. In this case the halfling mayor is the bad guy and the lizard men & naga are good. The hooks are mostly lame, including the horrendous “one of your loved ones is captured/killed” … which should never be used, ever, in any game, ever. It compensates for another hook in which one of the party members is deeded a mill, which is one of the better hook ideas. Giving the murder hobos ties to something, without punishing them for those ties, is a great way to encourage involvement. The read aloud has some truly horrid things to say, like “A woman named Mother Grundy owns this stall.” That’s a conclusion that can’t be reached by observation. Long descriptions of meaningless places, a boring swamp, a boring town … even a drifter camp is boring. How can a drifter camp be boring? AT least it’s got two halfling Coitius Companions interupted mid-haystack by lizard men. THAT’S good.

Room after room after room after room after room after room of combat make this one of the saddest adventures pushed thus far in Dungeon. Big HP opponents. “All of the cloud giants drink fly potions before the combat.” Long read alouds. Magic walls with 720hp. This is all textbook how to not write a high level adventure. After slogging through about a million high-level fights the big bad sits down to talk to the characters. Zoinks! The only interesting thing AT ALL in this adventure is the first encounter. The players stumble upon a village preparing to be attacked. Almost everyone is level 1 or 0. Then a 5d6 hail shower starts, followed by lightning strikes, followed by cloud giants riding rocs/dragons. The overwhelming nature of the attack is quite nice, along with the challenge of the party defending them … if they choose to do so. It’s going to require quick thinking and a certain selflessness, but I think it’s an interesting challenge for a high level party … let them die? Try and save them?