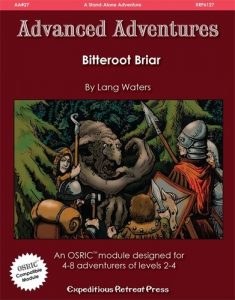 The small village of Ipwich has been plagued by mystery for years. Why do some people, last seen decades ago, come stumbling out of the woods looking as young as the day they disappeared, raving mad? Why does the forest itself whisper in the blowing of the trees or the babbling of a brook, beckoning to its center? Local folklore holds that the answers to these questions lie on the other side of an immense wall of thorns in the heart of the forest, the Bitterroot Briar, as do the remains of a good number of would be riddle solvers.

This is a charming little set of encounters/adventure in a magical grove. The encounters have a nice social and faction element, and all have that folklore vibe that I enjoy. It may be a little weak in a couple of parts, particularly those related to lore … like how to get in and get out of the glade. It has a curious mix of very nice magic items and boring mundane ones. Even with those inconsistencies it’s a charming little thing.

The briar/glade is in a forest with a nearby village and the adventure starts there. There are four or five NPC’s presented, each in a paragraph or so, and they generally have strong enough personalities to add some value to the adventure. The rumor table is ok, with a really standout children’s nursery rhyme, and more verses available if the characters play with the children. That sort of integrated rumor is a very nice thing indeed, and, in fact, the entire vibe is nicely done. People wander out of the woods, lost in time, slightly mad … It’s pretty classic folklore set up. Most of the the hooks are the usual weak stuff, like generic “rumors of wealth” or “set here by your boss” kind of stuff, but a singing sword calling to you and … an Admiral Akbar round out the good ones. Yes, one of the hooks is that the evil grove is summoning adventurers to it as a trap … but it’s not a total throw away in this one. The sick mayors maid is in cahoots with an evil spellcasting snake that lives in the grove. Oh, oh! And get this! The snake just has spells he can cast! He doesn’t have levels or any bullshit like that! That’s awesome!

The wanderers in the forest are pretty decent, with most of them being unique-like encounters. Hunters afraid of their quary (an owlbear) and other various NPC’s and things to talk to. It’s all well done. As are the actual encounters once you reach the glade. A mean braggart troll, that in the end just doesn’t have much fight in him. Giant bees, spiders, crawfish, and ants that can all talk and all have some slightly different goals. It’s almost like the glade is a prison and each of the little gangs wants out, hates other people, and is looking for an edge. The usual asshat pixie, a fairy dragon, giants talking frogs. This is one of the best, if not THE best, talking animal adventures I’ve seen.

The magic items are a mix. One of the effects is that the rumors say the treasure is in the trees, and it is … you can find treasure in the dead trees. There are also these weird sympathetic magic things, like a skeleton with spider web over its eyes … that acts as a gem of seeing if you hold it up to peer through. I LOVE that kind of stuff! There’s also a flute that birds like. It doesn’t charm them. It’s doesn’t let you control them, but they tend to come around when you play it. That’s another great example of a magic item that is described by its effect rather than the rules around it. There’s also a decent number of +1 sword/+1 dagger hanging around, as well as more mundane books items. That’s too bad, those are the least interesting items in the adventure. (Although … I might make an exception for that iron flask … but then again the Misc Magic Items were always one of the best DMG sections.)

The text is a bit longer than it needs to be, with two sentences being expanded to a paragraph, but the nail sticking out to be hammered down is the … lore? This primarily impacts two areas: finding the glade in the forest and getting out of the glade (you’re trapped there once entering.) The glade has to “find you”, which is mentioned in one of the rumors, but it doesn’t really go in to much detail on what you need to do to make the glade find you. Basically, you get to wander around the forest, catching glimpses of the glade, until you commit wanton violence on the forest, stumble across a certain pixie encounter, or someone specifically listens to the wind/water for ten minutes. That’s a bit … tenuous, I think, but maybe the evil village NPC could drop some hints. The other area is escaping the grove … it’s not really obvious. The grove is clearly meant to be a bit of sandbox, but the lore on escaping has an issue: if everyone knew it then they’d all try to escape … and they all very much want to escape (with a couple of exceptions.)

Those aren’t exactly show stoppers, in any way shape or form, and they don’t detract from the adventure as a whole. A little more organization, or clarity, maybe, but otherwise I think this is a nice one, especially if you’re in to the more simplistic/folklore view of adventure.