Curse of the Kobold Eye 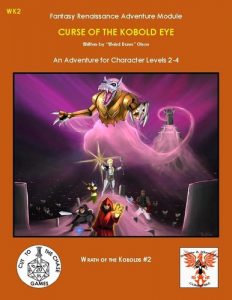 An unusual curse from their last brush with danger befalls a party of adventurers! Haunted by the spectral image of a one-eyed kobold warrior, the heroes must race to unravel the mystery of the curse while avoiding death at the hands of their ghostly visitor. Can they stop the effects of the curse in time before it consumes them entirely? A harrowing journey awaits them!

I try to be a good person. I promise. Do you think the people who write shovelware know they are doing it at the time? The answer, of course, is no. (I tell myself, for my own sanity, that it’s more like the way Ed Wood was depicted in the movie, a vision in their own eyes that doesn’t get fully communicated on the page. This shovelware raised $7k on kickstarter for a series of three modules.

DM Fiat. You know it as the crap-ass mechanic used by DM’s everywhere to enforce some petty tyrannies on the players. “Welcome to the game! Congratulations, you’ve been cursed, off-screen, and now you will suffer each day until you go on my railroad adventure. Have fun!” The party has been cursed, either from the first adventure (because they went on the adventure, you can’t avoid it) or a random kobold beggar on the street curses them. That’s the hook. Go on the adventure or else. This is not the fucking way you write, or run, an adventure. NO FIAT! Look, if the player has his character cut off his ear and attach the Ear of Vecna, then have at it. The SOB should know better and the player has made a specific choice for their character. Telling the party they are now cursed, for the contrivance of the adventure, takes away all semblance of control the players have over their characters. It makes it clear, in brutal terms, that the players are just toys for the DM, they have no control and their action, or lack thereof, are meaningless. Further, this PIECE OF SHIT hook has no real impact on the adventure. Other than punishing the characters and motivating them to go on the adventure, it doesn’t really have any impact. Evil Bob shows up a couple of times to attack them, on the curse pretext, and they have to go to the tomb to sprinkle the Magic Elixir McGuffin on his corpse, to break the curse, but this is all just pretext and not an integral part of the adventure. If it’s not … then why use such a crappy pretext?

The writing here is generic and abstract. “This room was once used for …” How many times have I railed against that sort of writing? Descriptions of what it once was, with little to no impact on how the party interacts with the room? It’s useless. It’s a waste. It does NOTHING to advance the adventure or provide a tool for the DM. This isn’t a fucking history lesson. It’s not a National Geo special on the burial rites and complexes of gnomes. NONE of that matters. What matters is describing something that the players will interact with. That’s the fucking point. To aid the in running the thing. This sort of basic lack of understanding of the point of the adventure is what has launched this thing in to thirty three pages. Yes, thirty three pages, for, maybe, eighteen or so encounters, plus a couple of wandering tables. Sure, there’s the license nonsense, and art, and DM and player maps, and monster stats, etc. But still, eighteen or so core pages, for what’s being presented? Long, wordy text that does nothing to add to the adventure.

Curse of the Kobold Eye, it is with great sadness that i bestow upon you the coveted tag of “Worst Adventure EVAR.” You join a hallowed group of Really. Shitty. Adventures. Your combination of a threatening hook, railroaded events, and boring and uninspiring encounters all combined with a writing style that can best be described as Phone It In earns you this prize. Your representative nature, being held up to all and standing in for all of the vast quantities of shovelware found on “Buy three get one free” shelf sales earns you this. Stand proudly, Curse of the Kobold Eye, know that you are just the latest in a long line of mediocrity in RPG design.

And because I am an ass: at one point you meet some giant badgers next to an abandoned gnome settlement. One of them can talk to you. I like talking animals, they harken back to folklore and I think conjure up a shared history larger than themselves. The poor things think you are the harbingers of the gnomes coming back and their greatness being restored. It’s a fun roleplaying encounter, overly described with too little specificity, but it also has a lot of potential and is the only thing in the adventure that is the least bit interesting.

And not enough fucking treasure! Gold=XP!

11 Responses to Curse of the Kobold Eye