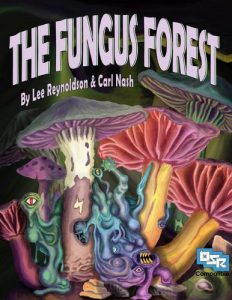 This adventure details a cave system of eighty or so rooms stuffed full of mushrooms and fungus. There are at least seven major factions running around inside, with several other random individuals and scattered unaligned monsters. There’s no motivation for initial exploration, but several possibilities, although once in there are several things can be done for the various factions. It’s got a decent layout, above average, to be sure, for a pay what you want product.

I am convinced that a good dungeon (an exploratory one, anyway) lives and dies by its social content. Without a social element the dungeon can be one-dimensional, combat after combat, and therefore boring. The set-piece design, spicing up combat, is not a solution, nor are traps or puzzles. A strong mix with a STRONG social element is the solution. Variety. The cave system here has seven major factions in the caves. Most, but not all, will talk to the party in one way or another. Most would like to see at least one of the other factions wiped out. They are varied enough to provide some variety in how they play and how the party interacts with them. In addition to the factions, and the mini-quests they can hand out, there are several unaligned individuals, each with their own goals. The friendly merman, the crazy old mage, the sad ghost, the witch. Most of the factions would like to see at least one of them wiped out. Most of the individuals are harmless or at least not as odious as the people wanted them killed. Moral quandaries! Yeah! In short, there are a lot of folks to interact with, get into trouble with, ally with, and have fun with. Good Time, good times.

The encounters tend toward two types: someone lives here or magic mushrooms. Someone lives here is pretty obvious, and it’s usually tied to one of the factions. Mushroom farming, guard rooms, defences and so forth. Magic Mushroom caves usually have a mushroom of sort in them, with some magical effect. In spite of many of the rooms being stuffed full of magic mushrooms, the rooms tend to the mundane side of the spectrum. Upside down waterfalls and other weird unexplained things (other than the shrooms) are pretty rare occurrences. In essence, take a normal cave room in a simple dungeon, shove it full of mushrooms, and call it a day. This is a little harsh but I would contend that the encounters tend more toward that side of the spectrum than they do The Fantastic. Most of the encounters have a couple of longish paragraphs that describe them, generally an appearance paragraph and then an effects paragraph. Here’s one of the better ones: “Dotted around this cave are seven large globular Fly Puffball Mushrooms. They wobble and shake and a faint humming noise can be heard coming from within them.” That’s not terrible. I would call it great, either, but there is an effort. There is some … misplaced? information in places that doesn’t do the DM any favors when hunting the wumpus for information during play. For example, you can parlay with the goblin tribe. They meet you at the entrance to their complex and escort you to meet the king. In the descriptions of the kings throne room you’re told that the king does NOT meet with parlay folks in that room, instead he meets with them in a different room. That room has no mention of the parlay at all, it’s just a pretty non-descript room. I understand, I think, the logic. The king is the one that parlays and the king is normally in his throne room so the parlay is described under the king description in the throne room. But that’s not what the ‘usual’ occurrence for the parlay, I would assert. This being D&D, the fucking players will probably end up parlaying with him on the other side of the map entirely, but, still, it seems off to me. I could cite other example of this organization logic as well.

The map is pretty, but I think may be a bit linear. It is, essentially, a ring road with passage off of it. There’s a river running through things, and some teleport circles that can add some variety. Once in a “section”, though, it’s essentially just side passages. It’s colorful, with some features on it like a few slopes and ledges. It could have been improved with, perhaps, some notations of which rooms have enemies in them (a small red dot or something?) Given the faction play, and the way some areas may mobilize (which is usually well detailed and not verbose) it would have perhaps been useful to have that data to help run the game a bit smoother without either having to do it yourself or hunt through the book during play to find out who can hear/see/notice nearby. That’s really just nit picking though, the map is serviceable.

Treasure seems a bit light to me. Gold required to level becomes a bit high at levels 3-4 (which I think this area is targeted at.) There are a couple of rooms with hoard-like treasures but I think the entirety could be doubled or tripled to get to some decent loot for Gold=XP games. I’m pretty sure this is targeted at those sorts of games, so the lightness seems weird. Likewise the magic seems a bit … off. The potions and scrolls are just potions and scrolls. The shields are +2, maybe with a logo of St Gygax on them. Not exactly exciting content there. There’s a unique magic item or three which are much more interesting. Better descriptions, more unique instead of book, scrolls on fey skin, wings embedded, or potions with eyes in them or dead dark fey … that’s the way I want in my magic items. There is some REALLY great mundane treasure though, including some dark fey/pixies rapped in amber jewelry and so on. Nice!

There’s an ok wandering table, with most of them doing something, and an ok but not great rumor table. I like my rumors a little more … conversational. A tidbit overheard, and so on. While there’s no hook there is enough in the dungeon to give the players one … although I would have liked to see it better integrated into the rumors table. The treasure hoards of the fey, the immortality mushroom, and so on. More not-pickings.

I’m keeping this, but I think it’s on the edge of what I usually keep. I may be unduly influenced by fey, caves, and mushrooms being present.Large social environments are not the most common thing to encounter, though, and the writing is probably evocative enough to kickstart the DM. This is pay what you want at DriveThu, etc.

1 Response to The Fungus Forest