Incursion of the Chained Devils 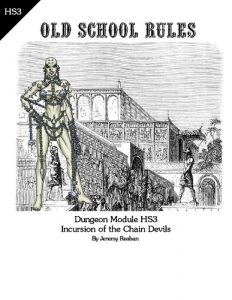 Three nights ago, strange lights and screams were heard from the local temple of Ishtar (or equivalent in your game, perhaps Loviatar, Xochiquetzal, or even Dionysus.). Most of the lower level priestesses fled. Can the PCs save the temple of Ishtar from the incursion of the chain devils?

This is a mostly-hacking adventure in a 20 room temple to the goddess of love that has been overrun with (mostly) chain devils. It is, essentially, rooms full of half-naked priestesses being tortured (in a pg-13 manner) with a full other encounters tossed in as well.A few of the monster encounters (the non chain-devil ones) are interesting, but the writing, while terse, is a bit bland for my tastes. Not terrible, but a little flat. Combined with the rather one-note design of “rooms with monsters” then this one is hard to swallow.

The writing in this is a bit flat for my tastes. Here’s an example, from the room with the librarian chained to the wall, above: “Tormenting her is an inquisitor kyton, a horrible monstrosity in a bishop’s outfit with tongs for arms. He clicks the pincers of one arm while heating the other pair red hot in a brazier” The good part here is that something is going on in the room. A captive and a menacing monster, replete with a bishop’s outfit and pincer arms. The good news is that most of the rooms have the creatures actually doing something. This gives the encounters a little more … relatability? The writing, though, is just a little flat.

There’s a ncie pool of blood that congeals into a blood golum, that’s nice. There’s also a pool of water with a devil in it that can drown characters though creating water in the lungs. Again, a nice little touch. But they don’t really have much life or color beyond that. There’s a encounter with devils munching away on bodies and even that doesn’t really communicate the horror of such an encounter.

Also: the treasure seems light for fifth to seventh level characters. There’s some reward for rescuing priestesses, and the goddess give you a random bonus as well, but the gold=xp thing looms in the background.

There’s a nice one page summary of the NPC’s in the back, with each of their personalities present. One of the hooks also has a nice idea: characters want a cleric hench? Rescuing one from a devil-filled temple is a great way to get a hench!

The creatures doing things in the rooms are good. There’s an effort made to give it an evocative description. It’s a little one-dimensional for my tastes (which the designer fully admits in the overview at the online store.) Rescuing a bunch of priestesses, and getting them out, is a nice little touch, as, perhaps, the traitor one. I’m not often fond of “traitor” NCP’s, they tend to be used too much and thus the players never trust anyone in the dungeon. IN this adventure though the traitor is mixed in with quite a few other captives to be rescued, which leaves less of a bad taste in the mouth.