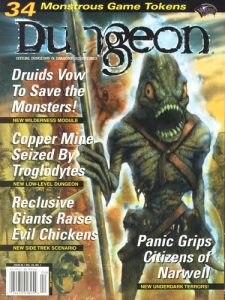 This monster circus (bandits, kobolds, trogs, drow) has several nice little bits going for it. It’s got the usual issues with a lack of focus in the DM text bloating it with useless trivia and making it hard to pull out the nice bits. A kobold comes to town begging for help, which leads to bandits in the woods and a nice- (but linear) cave system followed by a boring mine housing the drow. In principle the kobold hook is quite nice, I think, but it is marred by the read-aloud, lengthy DM nonsense, and then a “roll to continue the adventure” diplomacy check with the kobold. Fail, and you don’t get to go on the adventure. The bandit ambush takes up a full page (stupid 3e stat blocks!) but the associated bandit content (they spy at a wilderness inn and hit you on the way out of the caves if you’ve loose lips! The spies also have some personality to help run them) is pretty nice and gives a nice continuity to the adventure and (at least a couple) of the encounters. The cave system gives way to the mine and it’s mostly a linear affair. If that were ignored then I could point to the varied terrain and obstacles in the cave, elevation, boulders, water levels, etc, as being nice elements which provide both variety and tactical opportunities for both sides. The kobolds, also, can be bargained with, which is always nice to see. The mine is mostly boring content, presented quite verbose, and has one of the charm of the caves. The cave and/or bandits might be worth lifting for something else, at least as concepts, but the linear nature makes this one too hard to save.

Lord of the Scarlet Tide
By James Jacobs
3e
Level 9

Wow. Suck. A long/large adventure through 24 or so underdark caves and passages trying to find the source of an infection. It’s just room after room of either a boring monster or an overly-long description of an empty room. You meet a mind flayer to talk to! Who turns on you. 🙁 A little ruined city, full of boring monsters, leads to a ruined temple, full of ghosts, and a magic item to cure the disease. It all seems pretty monotonous to me, with little, except maybe a behir, to mix things up. L>A>M>E It’s as if you created a large random dungeon map and did a 50/50 chance: stuff the room with 2d6 orcs or write two paragraphs describing how the room is empty. That’s not an adventure, or at least a good one, in my book.

Side-Trek! A couple of stone giants keep some cockatrice as pets, in a pen.

Druids used to be popular bad guys in 1980’s D&D. They return! There’s some bullshit/vomit-in-the-mouth “natures balance” stuff in this adventure, thankfully mostly in the background so it can be ignored. A ranger keep is overrun by monsters and you get to investigate, kill the monsters, and recover the bodies. It’s just an excuse to put a bunch of monsters in close proximity to each other. Theoretically there might be some chances to parley with at least one group and/or get the creatures to fight each other. It ends, probably, with fighting the asshole druids, which can be a tough fight since the leader is L8. There’s some nice imagery here and there regarding the monsters feeding on the dead rangers bodies, but the map is boring and it’s just a monsters circus.