The Lost Temple of Forgotten Evil 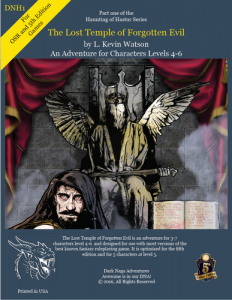 The small town of Boldon, and its surrounding villages are afraid. Dozens of people are missing, some speculate lost to some nefarious purpose. A broken drunkard tells fantastic tales of an evil temple and the horrible things within. The rare few who know the legends and history of the region are beginning to think the dark times have returned; not seen since the fall of the rst age of man. People are beginning to feel the icy fingers of fear closing in. The party becomes aware of these events, and is inspired to investigate. This leads them to a broken man who tells them a story of a lost temple. Has it been rediscovered by men seduced by its forgotten evil? The drunkard’s tale leads to others who might help the party discover more before they face The Lost Temple of Forgotten Evil.

This is short evil temple “crawl” that is preceded by a bit of an investigation in order to find the temple. From a 10,000 foot view the adventure is a little interesting and relatively well organized. Unfortunately I found the execution of that vision terribly flawed almost in every way. It reeks of being overly verbose and providing trivia in place of gameable content in encounters. And then it goes and provides gameable content in a kid of “continuing the adventure” section after each encounter. It’s quite frustrating. I’m going to pick this one apart. But only because I care.

The first eight pages are garbage and can be ripped out and forgotten. Regional background that will never come into play. “Over 1,400 years of history and lore” … which provide little to no value in terms of gameable content. A summary overview that provides no summary. “Two encounters are combat and two encounters are role-playing.” Joy. When you see something like that you just know. You just know the designer doesn’t get it. They are following some bullshit “rules of writing an adventure” nonsense. Anyway, i don’t dink adventures any more because they provide this bullshit background information, unless it contains information needed to run the adventure. This, thankfully, does not. It’s just filler fluff that obfuscates the fact that it’s not actually a 36 page adventure, it’s actually a 28 page adventure and one quarter is just filler.

I might also note that that this first eight pages contain the crappiest, or maybe greatest, example of hooks ever. Every single hook ever that lacks inspiration is detailed. In a sentence. “They were asked by a patron or other contact to investigate.” My, that’s original. Another one has a reward. Another one says they are from the region. Another one says they are from outside the region. And let’s be clear, it’s not like I’m abstracting these, they are already abstract. “The players could be from another part of the kingdom and sent to [town] to help.” Seriously? That’s a hook? What’s next? Caravan guard? Oh, why yes, there is a caravan guard hook! “The players could be guarding a caravan that is bringing ore to [town] and decide to look into the trouble.” This shit is absurd. It is abstract and non-specific. It’s like some weird story-based adventure I reviewed: “You may decide to have the players encounter a monster.” Really genius? Thanks. Thanks for the trouble. You know, I was really having trouble but now that you’ve suggest they encounter a monster/be caravan guards, get hired to look into thing I’m now fully inspired. This sort of generic dreck of writing is the bane of adventure. Let’s be clear, I’m not looking for two paragraphs per hook. Nor am I even looking for two sentences of detail. I’m looking for SPECIFICITY. Specificity is the soul of storytelling. By being specific you take advantage of the single greatest resource a designer has: the DM. It needs to be JUST enough to inspire the DM. “They might be caravan guards.” is not inspiring. It’s the opposite. BE. FUCKING. SPECIFIC. Not Wordy. Not Verbose. SPECIFIC.

The idea is that people are disappearing and eventually you find a drunk, who’s central to the first half of the adventure. There’s an interesting bit here. The drunk has a tale and you can follow up with him to find more details about the dungeon/temple. The more legwork you do the more details you get, up to a certain point. This sort of “try and find out where the rumored dungeon is” and “do some research on the dungeon before you get there” are both appealing. They reward the prepared and thoughtful players and add some interesting roleplaying to the encounters. Find a dungeon map, find a regional map, get the secret of a door from a sage. Neato mosquito.

And the concept is mostly where it stops being neato (mostly.) The drunk is possessed by Hastur who tells them the tale to “lure them into the temple.” Fucking wonderful. Haven’t seen that one eight thousand times before. Worse, it adds nothing to the adventure. It’s just meaningless detail that goes nowhere.

Then there’s the monologue. It’s a page long. A. Full. Page. In red/beige text. On a beige background. In italics. If I tried to read a page of text my players would leave the house. Seriously. They would get up and go to the corner for a pack of cigs and I’d be lucky if they came back. Seriously? A page? There was that famous informal WOTC GenCon observation where they noted you got two sentences, MAYBE three, before the players lost interest and stopped paying attention. The section is actually titled “Monologue.” I’m lost … is there a parallel universe in which “Monologue” doesn’t mean “complete crap?” It’s like titling your section “Generic Content that I didn’t try” Why would you do that? The ONLY saving grace here is that there’s half a page of bullet points, before the page long monologue, that details the key points of the monologue. If could be slightly better, but seeing as how the monologue is about the twelfth time the adventure relates the drunks tale to the DM, the summary is appreciated. It’s the kind of organization that the adventure should be providing (and does in several cases.) Again, it could be more specific, but at least you don’t have to wade through the morass of that crap-ass read-aloud.

One of the nics things the adventure does is, after each major section, it provides a “What Happens Next” summary. In bullet form, it provides some ideas. The cultists will sacrifice 4 people a day for a month. The Town guard will look into the beatings, the characters will be shunned. It’s a very nice little section and adds a lot to the adventure in terms of DM tools. It is, essentially, a short outline or other logical consequences and it provides the DM with JUST enough generic information to help the DM add some more local color and events so It’s not a straight “A then B then C” adventure. It’ does this after each of the seven major sections in the first half (the investigation) portion of the adventure and it’s a good addition. A little lengthy and verbose, but great idea and it EXACTLY the sort of resource that an adventure SHOULD be providing to a DM.

Similarly the encounters have a nice little section which provides the motivations. “Beat up people in celebration of the coming horrors.” Hey, that’s great content. I can now run the encounter with 4 cultists in town without ANY more information at all! Or, maybe “Jopha wants to ensure he gets a reward for his map.” Again, great! The adventure does this almost every time, and it does it in a great way. I might quibble with one encounter, in which townies beat up an old man, for burying the townie motivation in the text. But, in general, you now pretty much know know to run this encounter. Maybe one more sentence on any character quirks, maybe one bullet point on “local color” for the setting, and then on with the show!

But that’s not what happens. What follows is not a bullet point but rather several paragraphs of information that do little to add any value to adventure beyond that motivations. Two or three or four paragraphs that add very little. Focusing this, trimming it WAY down, and keeping just the core would have been far far better and far easier to run at the table. Again, the goal is to provide terse specificity to inspire the DM, not endless words that the DM has to fight against in order to find the adventure/key points.

I would note that one of the encounters has same lameness to it. The sage has a shit-ton of at-will powers, can cast any spell, etc. I like my wizards weird and I like it when they don’t follow the players rules, but this is a little far for me. It smacks of a DM plot shield, even though he has no purpose in the plot. For no reason you encounter someone inexplicably powerful … but who can’t be bothered to do something himself. DM Fiat is not a compliment.

The dungeon section is terser and manages about five rooms per page for a sixteen page dungeon/temple. There’s some pretext on why no one comes to anyone else’s help (heavy curtains!) The wall of text element is always present, making it difficult to find the good stuff. It’s a good thing that there is little good stuff then. It’s mostly just normal rooms with dudes in it, overly described with meaningless detail. I know what a bedroom looks like and don’t need it explained to me that there are four incense burners, unless they have some impact on the adventure. And they don’t. There is an effort to provide a little detail on what the cultists are doing in their rooms, but invariably it is just “praying” or “sleeping.” Once again, some gameable specificity would have been nice.

A couple of game system notes as well: A DC25 check is kind of high in 5th edition, I believe? There’s one note on OSR specific details, which seems a bit unusual. I’m not complaining, I don’t think conversion notes are generally needed, but it seems weird that ONE would be provided. Forced combats are weird in OSR adventures, since combat isn’t the focus. Likewise, the treasure is very light for a gold-for-xp OSR game.It’s clear this is a 5e adventure converted over. It’s also interesting to see both the OSR stats and the 5e stats side by side. 5e stats are SO much longer, because of the slavery to the form that is seemingly required. It’s also interesting to see the creature difference; it’s almost like the designer is afraid to give the OSR versions anything other than bare bones attacks. Shapechanging, special resistance, etc, all seem off the table for the OSR stats where they are listed for the 5e version.

There’s a comment, regarding the evil alter room, that there are 40 cultists present twice a day and it would be suicide to attack during those ceremonies. Au contraire! A couple of barrels of oil rolled into the room, a couple of fireballs, fighters in the single entrance corridor choke point, maybe dump in a couple of enraged bulls right after the inferno! I think it’s the BEST way to approach the combats!

The adventure is organized well. The follow-up sections and motivations are quite good. It’s got too much generic useless text and most of the temple is boring and uninteresting.

9 Responses to The Lost Temple of Forgotten Evil