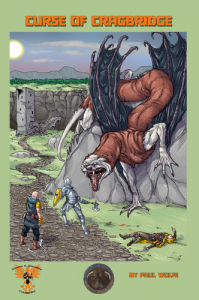 Prison of Spirits Betrayed! For five hundred years, Cragbridge has stood abandoned and cursed. Within lurk the haunts and spirits of those that served Lord and Lady Etheril. Some of these ghosts inhabit the forms of strange insectile humanoids while others guard tombs deep beneath the shattered bridge tower Recently, the good knight Sir Dougal Skavok disappeared in the ruin, and when a search party returned, they twoo were missing a few members. But they carried strange treasures found there: coins marked with a double-headed raven, gemstones of great value and other ornate and gilded items.They also spoke of the evils that lurked there, cursed forever by the vengeful Lady Etheril.

This is a interesting dungeoncrawl, with S&W, LabLord, and DCC versions available. An accursed gatehouse sits on the top edge of a river canyon. Inside are three upper levels in a tower and three dungeon levels, with about fifty rooms laid out over forty pages in a large font single column format. The S&W & DCC “original content” vibe is strong with this one, with all new monsters and almost all new magic items and some nicely homebrewed weirdness going on inside. The … gentle originality and weirdness? Of the dungeon reminds me of my favorite adventure of all time. Make no mistake though, this is a TOUGH dungeon for adventurers.

The backstory is about half a page and contains both the known/rumored history as well as the DM notes on what the truth is. Given the large font and single column layout this is about the right length. Not too long, a little bit to work with to feed the party data, and then it moves on. A brief area overview follows along with monster descriptions and the like, and then the keyed entries start. This amounts to a short and focused intro, conveying the information the DM needs in a way that supports their use of it during play. Rumors of former parties, pointers to who they were, just enough to poke the DM in the right direction and let them fill in the rest. A perfect outline … even if it is in paragraph form!

The rooms are pretty minimal, the way rooms should be. “The rotting corpse of a man clad in chain armor lies in the corner.” Doors are flimsy and rotten or strong and ironbound. Rooms are packed to the ceiling with swollen rotten barrels barely containing the organic slurry within. A pipe is clogged with rotting food, wood, and corpses. A room is crowded with lichen and creatures crouch in dank rooms. There are things to look at. There are things to fuck with. There is the 2+2 history of the place to put together and alters to defile or clean. This is the strength of the adventure. The rooms descriptions are generally no longer than they need to be. The rooms are generally active places, described in ways that are evocative and terse. They have things in them that the party can interact with (if only to investigate or loot.) It’s not quite a home run but it is very very good, in a journeyman sort of way. The rooms don’t feel like set pieces but they do feel interesting and even the empty ones, with one line descriptions, make you want to know more and poke about.

The monsters here are wonderful. They fully embrace a non-standard vibe and fit in well with the “cursed keep” vibe thing that the adventure has going on. Weird mutant hybrids, with larval form that crawl back to respawn anew once you kill them … along with weird little humanoid creatures that skitter about. The crawl on ceilings and walls, squeeze through cracks. There’s just enough horror in them to impart that part of the cursed history. No giant rats or stirge in this adventure, and I love the air of mystery and excitement and anticipation that brings to the players.

It does a great job also in providing monster drawings and maps at the end of the adventure. Printing these out and using them, either the maps for the DM or the creature illustrations to show the players, is a great thing for the adventure to provide the DM. It shows an understanding of how the product will be used in actual play and how to support the DM in that. It’s a nice touch.

I have a couple of criticisms. I’m not sure how valid they are. They FEEL like problems, but I think i’m also being a bit nitpicky here.

The map feels a little small … or maybe constrained is the word? It feels tight for the quantity of monsters present. I’m generalizing, but the levels FEEL like they all have one large room with other rooms hanging off of it. Thus the point of tactics is to always retreat backwards the way you came. The only real third dimension present is the collapsed roof of the tower and, maybe, secret doors in the floors. I appreciate both of those but they do tend to reinforce the constraining view of the dungeon. That’s not always bad, but I’m unsure how it works with the large number of monsters, some of which are quite tough, with the flimsy S&W Level 1 characters.

The treasure feels a little light, also, especially at the upper levels. Those have been explored and thus there’s a reason … but sometimes a party can lose heart if not given the occasional cookie. I was more than a little surprised that the big upper level boss monster, at 6HD with some killer attacks, only had 800gp. (Plus, some eggs, so there’s some fudge factor in those.)

The large font and single column layout also makes things feels a bit … hard to use? Actually, let me back that up. The weirdness in the format was in the wandering monster section. The table have seven entries and awkwardly takes up about a third of the page. Then the monster entries from the table are listed. In essence, all of the monsters from the adventure are placed in the middle of the adventure. This seems really weird and I suspect is a main during play. Moving them to the rear (easier to find) would help with this. Other than this one slight formatting/layout issue, the larger single column format isn’t really a hinderance at all. It certainly makes the product longer, from a page count standpoint, but it’s also pretty easy to find things.

Let’s be clear: I really like adventure this and I’m keeping it. I WANT it to be as good as my favorite adventure. It might be. Something is keeping me from saying it is. I think maybe what’s keeping me from doing so is personal taste. I’m a bit more inclined to fanciful folklore and this leans more towards a tragic event and curse. This is a very strong adventure though and I would not hesitate to recommend it.

6 Responses to The Curse of Cragbridge