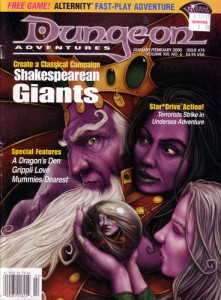 Oh god. Do you know how to tell when you’re about to have a bad day? When the cover of Dungeon Magazine proclaims “Shakespearean Giants!”

Ok, ok. It’s not as bad as I thought it was going to be. It’s King Lear. It’s got a weird mix of abstraction and keyed entries. It’s scene based, which is never a good sign. A fight scene with 5 giants is weirdly detailed but the camp of 95 giants is almost completely abstracted. (but, hey, 95 giants! That’s a cool encounter!) Similarly the sons of Gloucester are essentially abstracted into two encounters, while Lear’s evil offspring get some bit of encounter/key presentation. It’s thick and dense writing, with a lot to convey and even more prep work for the DM, especially when it comes to the jester. I’m not sure it’s runnable in any decent form without ten or so hours of prep. It’s one of the better Shakespeare adaptations in Dungeon … but a ten hour prep is not what I’m looking for in an adventure. As a bit of advice … if your NPC requires two columns of text to describe how to run then the something is wrong.

Oh man … a side trek. Four pages. While in the baron’s throne room an old woman enters. For some reason the party doesn’t kill her immediately. Let’s see … using a scroll the baddie cast Veil on himself and his followers. And a delude spell. And a stoneskin spell on himself and his followers. And strength spells on his main followers. Wait!! Wait! It’s better! One of them has a spring loaded thing on his arm so his wand of polymorph shoots into his hand, all Wild Wild West style. And another one throws glass vials full of green slime. Someone else has a wand loaned to her by the baddie. I’m sure it’s obvious I loathe this shit. No doubt these are Peter’s pet NPC’s and/or stand-ins for himself in his game. This reliance on .. contrivance? To create content perfectly illustrates the decline of D&D. If the elf shot green slime rays from his eyes I’d have absolutely no problem with it. It’s the need to EXPLAIN and to hamper the DM with the rules that I find … detestable. Every rule ever created for D&D is for the players. Imagine there are 1 billion schools of magic, each as different from each other, and from the magic system presented in the books, as plasma is from human baby. That’s the relationship between Da Rules and the DM. PC’s memorize and cast spells. NPC’s shoot green slime rays.

Peer Amid the Waters
by Johnathan M. Richards
AD&D
Levels 1-2

WoW! This is a good adventure! And I don’t even mean it on the “by Dungeon Magazine standards” grading curve! It’s actually good! I’m serious! Ready? I’m totally serious here, it’s good EVEN CONSIDERING WHAT I AM ABOUT TO WRITE. First, keep in mind it’s for level 1’s. And has what feels like an endless and boring backstory. And a hook that feels like it’s about 10 pages long … all to keep the party from killing some asshat nixies. And then consider it’s underwater. And has two mummies. (got magic weapons?) And an undead leopard. (more magic weapons needed!) And all of the room descriptions are like half a page long and full of shit no one cares about. AND ITS GOOD! I know! Level 1? Underwater? Ha! A million loaned things for the arty, right? Right? No! Nixie kisses! It’s wonderful! All is right in the world, it fits perfectly! And an egyptian tomb to explore? (a teleport circle opened a portal underwater to the tomb.) Lame … except … it’s an alien environment,, and totally bizarre to find out of nowhere! Mystery! Wonder! And combined with the already alien environment of underwater, it works great! And the DM Torture Porn of Underwater Adventuring is toned down to be just the good parts that are fun and enhance the adventure! How is that? Light sources halved … so the descriptions play on that … shadows and chaos suddenly appearing in your (very) restrictive magic 10’ light circle! And not immediately attacking you! Lungs full of water and can’t cast? How about an air pocket under an overturned boat? Or a glob of air stuck to a diving beetle? Perfect! Mummies? That’s easy! The folks who you are in search of almost killed it AND it’s got a CLEARLY magic sword sticking out of its back while it’s engaged in a fight with the diving beetle! The undead kitty is torn between protecting the tomb and curling up n a ball every round, because it’s a cat in water! Treasure chamber problems? The party has enough time to grab some loot before the teleport circle starts to disappear! This things MASTERFUL in it’s design It exploits the FUN inherent in the situations. I LOVE it when I expect something to suck ass and it turns out wonderful! WAAAYYYYYYY too much text in this, but fuck it. Get a highlighter and go to town! All Hail Discordia!

A good concept, ruined. The party find a magic bag that turns out to be a mashup between a bag of holding and a instant fortress: a little home inside of a bag that you can climb in to. Pretty cool! And then the three derro trapped inside attack. That’s all Derro EVERY do in D&D: attack. Sometimes I feel like there was a special monster manual that only had derro in it and that a significant number of Dungeon Magazine contributors only had access to that one MM. No, they are not thankful or grateful for being released. I would be. Demons, djinni’s and derro are NEVER thankful for being released. That sucks. Having an evil buddy could provide LOADS of fun roleplay. Think how many great things could have been in that bag … instead of three derro who instantly attack. Lame.

A frog-man wants your help to get through a doorway. It’s a three room cave with a duergar and some skeletons. The grippli is very charming and has a nice story; it should have been presented as NPC data though instead of a giant monologue. It’s a nice non-human motivation with enough relatable content for the players to want to help.Otherwise, quite short.

This is a brief overland journey and then an assault on a white dragon’s lair on an island in a sea of ice. Except the dragons dead and a frost giant family has moved in. The overland coomes form a map the characters get on a tapestry, showing the way to the dragon’s lair. Nice little town bit, nice little features on the (very brief) overland. It’s almost abstracted … especially compared to the description length on the island. The island has a nice map and the concepts in it are quite nice, but the length of the rooms changes dramatically to be quite long. Paragraphs to describe each trap, lots and lots of room decor information, and so on. Which is too bad because as a kind of “fully realized front giant home”, on an island, it’s actually pretty nice.