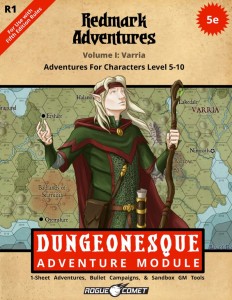 I’m terrible at reviewing products that are not adventures. This is not an adventure so I’m going to be terrible at reviewing it. It’s a DM’s toolkit for a campaign. Imagine one of the old Gazetteers or one of the older MERP region modules, but in both cases cut out the minutia that tended to clog up both products. Replace the minutia with content directly aimed at running/supporting a campaign, including lots of short little adventure ideas and ten or so two page-ish adventures and a lot of other supporting data. It’s a kind of campaign construction toolkit in a box/40 pages. I find the idea intriguing and I believe it mostly succeeds at what it is trying to do. I’m just not sure I have any room in my DM’ing life for a product like this.

I’m going to resort to describing the toolkit presented, something I am typically loathe to do. There’s a small background section that attempts to explain what’s going on in the region, to communicate the flavor. It alludes to court intrigue and collective power that is generally not referenced again. What follows that is a brief paragraph or so on several hexes/regions on the map, each with a little intrigue or rumor. Rumors of lost dwarven riches in the mountains, an industrial hellhole dwarf town., anti-human elves in the forest, and so on. The main city is then detailed in ten paragraphs, each one describing one region of the city, and each one having one concrete fact associate with it. A barkeep, the hotel owner, the old docks/criminal district, the site of an orc massacre, and so on. Just enough to make the locale non-generic.

There are then three brief “bullet point” campaigns presented. In about one column of text a potential campaign is outlined at a very high level via some bullet points. The Elven Supremacist campaign is probably the strongest idea. The second, related to cultists, being rife with stupid Forgotten Realms like names. “R’dag Kalendon, Agh Tahnu,” … uh, what? People named? Titles? Place names? Still, it’s not a nice virgin sacrifice/slavers thing going on. The third is a nice idea but goes nowhere, and has as its central theme a volcano beginning to erupt. Whereas the previous campaigns have action-oriented bullet points (They try to assassinate someone. They try to sacrifice someone. They try to kidnap someone.) this one is written very passively. There’s an earthquake and you befriend a young virgin. The cultists want to do a virgin sacrifice, while slavers sell them some. An earthquake and cultists recruit more converts. A lake becomes acidic and people who fall in get chemical burns. The town water supply becomes contaminated and the townspeople want to sacrifice more virgins. I just don’t see the adventure in this. Or maybe its a problem with the implied morality for slavery/sacrifice=wrong, but the slums and other stuff earlier are ok to tolerate? IE: the implied morality required to hook is in opposition to the implied immorality earlier in the adventure. Also, it IS written much more passively, almost like the characters are watching a movie. If I were running this I’d probably run all three campaign bullet points at the same time, with the village hooks and other adventures sprinkled in. More Chaos is Better Chaos. 🙂

After this come twenty towns/villages, each in a paragraph, to sprinkle into the game, each with its own adventure hook, and then a selection of random names to use and a selection of magic items to sprinkle in. The magic items are generally quite good. “A bleached skull etched deeply with symbols of infernal necromancy” or a smokey grey-metal hammer, light as a feather but hard as stone. Or a bronzed book of empty yellowing pages. Great imagery in those, and in the other 20 odd ones as well. (The mundane treasure table is also nicely descriptive.) I might quibble with the fact that most of the magic items are just tied to a spell. The book allows commune. The hammer allows knock. The skull allows ghost jar. (All at some interval.) I get that it’s an easy way to handle the mechanics. I hate mechanics. I guess the pedantic crowd would go nuts or something if you just said it allows you to create and send out an eyeball to see through once a day. I don’t know, appeals to standardized mechanics kill the excitement and enthusiasm I feel inside. It’s just me, and I’m just being an ass here.

The ten or so adventures are in the style of Rogue Comets 1-sheet adventures. IE: one page, front and back, a little map, a notes section that isn’t needed since it’s being printed (and thus you can take notes anywhere) or used on screen (in which case you can’t write notes), a visuals sections that is useless and shouldn’t be there, a 5E stats section that feels not usefull and extraneous, and a small series of keyed encounters. “The floor of this area is greased with the fat and blood of untold beasts.” NICE! An “off” fountain with a rusty valve that rains down filth in a 40’ radius if opened. NICE! In general the encounter descriptions are just about the right length to support play.

I might quibble with a point or two. In the third adventure the DM is advised to give the annoying fey, which the party is chasing, a “plot shield” if the PC’s attempt to hinder him or harm him as he flees the area. FUCK YOU! FUCK YOU AND DIE YOU PIECE OF SHIT! FUCK YOU AND YOUR PLOT SHIELD! YOU ARE EVERYTHING THAT IS WRONG WITH D&D! How about instead I just pull out my phone and fuck around on it and you, the DM, fuck off, since I’m not being allowed to play D&D anymore? How about that. Eh? Oh, hey, btw, did you know I’m in anger management classes now? Squeeze right thumb and breathe deeply.

Anyway … the adventures are a mixed bag, with a couple of them being linked together. Taste-wise, the ones that skew towards the mundane and weird are better than the elements with fucking tinker gnomes and “the girl wears a trap harness that mimics spell effects” bullshit. I understand those are elements of personal taste, and they do tend to be surrounded by some nice “tainted chaos villager type stuff. The included bestiary at the end will be loved and treasured by the pedantic “it can switch between these effects as a free action” and make me second-guess my support for the indiegogo campaign. Tough position to be in. Include content that appeals to gamers that prefer the pedantic mechanical details or write to appeal to those who enjoy a loose style. I don’t envy the authors.

It claims to be a campaign toolkit, and not a campaign. And it IS a campaign toolkit. You’re going to have to sit down for 30 minutes to sketch out this evenings game. Cutting some of the dross (three maps per map! One mini DM map, one large DM map, one unkeyed player map!) and instead perhaps expanding certain things. If the villages were a ½ page or a? page, with some expansion on the adventure and maybe some villagers/quirks/etc that would go a long way and add … 3-5 pages? The same with the three campaigns. Expansion to half a page or a page would do wonders and maybe get them to the point where the booklet could be a TIGHT little zero-prep campaign. Some of the themes are a little inconsistent as well, and maybe they needed to bullet points those themes? Slum elves might be one. Elf discontent is mentioned once, and slums are mentioned explicitly once. An opportunity lost for the theming of the entire game?

The concept here is really nice. The execution of the concept they are focused on is spot on. It does exactly what it needs to do to be a non-generic campaign toolkit, and is organized VERY well. In fact, I think I’ve seldom seen something with a vision that achieves it so well. I just wish the vision was a tad different …. 🙂

Again, available at DriveThru, as a part of a bundle.