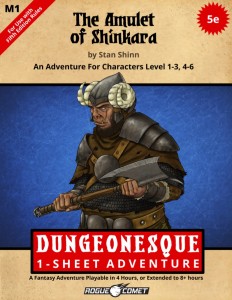 Before you spiral stairs, descend into a cobwebbed and vermin-filled grotto: the perilous lair of the orcs. The raiders of the Orc Lord Sharg have long menaced the local shires of Tenamen, but their thievery has now gone too far. Sharg’s Orcs recently stole the glowing green Amulet Of Shinkara whose unique healing properties alone can restore the ailing Lady Alana of Tenamen. You are oath bound to retrieve the amulet to save the princess. The 1,000 gold piece reward for the amulet’s retrieval certainly bolsters your willingness to descend into the skull-littered chambers below! Can you survive the unknown perils below and find the stolen amulet in time?

This is a decent adventure. I’m going to nitpick it to death because of the chosen “1-sheet” format. If I paid $5 for it (and I did) I wouldn’t feel cheated. Oh course, if it were better then I’d look FORWARD to running it …. 🙂 I stumbled upon these while giving some indiegogo money for a cut down/basic set of the 5e rules. If I was going to buy the rules I decided I might as well get a preview of the writing style.

This is a 1-sheet adventure, front & back, which details an orc cave and has a couple of extra columns of text to provide some context and pretext for going adventuring in them. These sorts of limited page count adventures give me fits in reviewing. I feel like I pick them apart on details … but they, by their choice of formats, invite this, I think. Which isn’t a criticism at all for their chosen format. I think that the 1-page and/or 1-sheet adventure has a lot of merit. It requires a focus to pull it off and that focus should, I hope, reflect further when the designers move into longer products. With only a page you have to choose your words for maximum impact and I’m ALL about maximum impact. I also feel like I end up writing reviews that are much longer than the adventure. To his credit Stan has crammed A LOT into this. It’s got multiple possible “plotlines”, is statted for two different levels of adventurers, contains reference data, and includes some intrigue and/or factions in the dungeon. It’s also one of the most OSR-like adventures I’ve seen for 5e, not that I’ve seen a lot.

There’s a little section of boxed text to start the adventure off, followed by a short couple of paragraphs of player background. These both seem to do the same thing in the adventure. There’s enough information in the read-aloud to either use it verbatim to start the party in front of the dungeon stairs, or to use the information in it to expand it a bit in a hook you can roleplay. The players information section, which is about 1/18th of the entire text, is mostly … oh I don’t know. Irrelevant? Adds little? There are a couple of nice bits in it about multiple bands of mercenaries being sent out and rumors in a little village that could be worked into more by the DM (that’s a good thing.) The most lengthy section of it through, the background of the lady’s illness and/or reason you need to go looking, don’t really add much interesting to the adventure. The “multiple groups of mercenaries” lets you add some more factions and kind of “gold rush of killers” aspect to the adventure. The rumors in the village let you add a kind of village on the edge of ruin aspect to the adventure. But the background on the illness and the “the orcs stole it” don’t really add much in the way of content you can expand upon.

SImilarly the DM’s background. It’s a mix of text, tables, information that’s useful and information that’s not. A small random monster table has JUST enough extra data. “Treacherous rivals seeking amulet” is enough to run a decent wandering encounter. There’s a small section of rumors and a small section on generating a random storyline. Both are related, so the rumors may be true or false depending on which plotline and/or complications you roll/choose. And “plot” is a strong word here. It’s really just some extra stuff like “who actually has the amulet” and who ordered the theft, if anyone, and or is the amulet a fake. As always, I would probably choose ALL of the complications and run them at the same time. Chaos is a good thing, after all, it’s all just a pretext for having fun. I’d say it’s all targeted at making the adventure LARGER. What happens after the adventure, what does the amulet actually do, and so on. I appreciate it. The section rubbed me the wrong way at first and it was overly something quite minor. The first sentence of the section says that the party can dispatch a messenger boy to tell your employer of your finding about the caves, before you enter. It’s like, two sentences long. And I wanted to hate everything in this section because of it. SHould that one paragraph be stricken I’d say the entire section does a wonderful job of expanding the adventure context while retaining focus. I don’t know, sometimes I can be an ass.

There’s a couple of sections that follow that add little to the adventure. “Visuals” says “The GM may want to prepare a map of the lair.” Well, yes, and I may want to buy chips & soda also. It’s really just filler text. The next section is on 5e stats and I really have a hard time understanding why it’s in the adventure. Basically, it says “go look in the SRD for the stats” for each and every entry, and lists the CR & XP. Everyone in awhile there’s a note to the effect of “Shagrat: treat as ogre for stats.” Decent, but probably doesn’t need to consume as much space in the adventure as it does and could be included in the room stats.

The descriptions are generally pretty good. “Lit poorly by greasy cancels burning in upturned skulls of humans, elves, and sheep.” That’s pretty nice! Orcs gambling for shanks of mutton and babies playing with human bones and slugs is a nice touch also. The room descriptions are at their best when they are proving that degree of interesting “quick hit” detail or when they are detailings factions, etc, like the blinded orc in love with a beautiful nymph. They are at their worst when the provide mundane detail or history, or things that can’t easily be introduced into play. “A cave descends from the valley above and into the lair.” Or “The orcs usually let garbage fall where it may, but when they must they force (blind orc) to shovel it into the refuse pit. There’s also a nice bit where the shamen torturer kills people through torture and then brings them back to life to torture them some more. That would be excellent if it could be worked into the adventure in a better way. As written the two shepherd prisoners who relate it just give the party extra moral authority for their slaughter. Maybe a bit about the ors claiming to be misunderstood or something, until the secret gets out? I guess if the party come in by bluffing their way and get a tour it might happen, or the blind orc could grump a bit, but those seem like a stretch. Maybe you MEET the orc shoveling the filth, with his sewn shut eyes.

The map is fine and complex enough for an adventure of this size. The treasure, except for the titular amulet, is not that interesting and is disappointedly abstract “3 pieces of jewelry worth 150gp.” Compare that to the full suits of armor with Wolf Head helmets from the Death House portion of Curse of Strahd. Which would you rather have?

I wish the adventure text was more like the good examples I cited, all slugs and human hands baby toys and greasy cabled in sheep and human skulls. If there was one bit of criticism or advice I had it would be something related to that, more focus in that area. I don’t have a problem paying $5 for a good sheet of paper, I think the issue comes in when folks don’t understand what they are getting for their money, when they are gambling. Somehow gambling $5 on a 20 or 30 page adventure seems ok but not on a 1-sheet adventure, I suspect. As it is this is kind of borderline in my … tastes? I like the basis of the experiment, in 1 sheet, I like the background/DM sections, I like parts of the rooms. I just wish the treasure was more interesting and, in particular, the room descriptions/encounters were more consistent in providing that “quick hit” gameable flavor that I’m always looking for.

This is available at DriveThru, as a bundle: