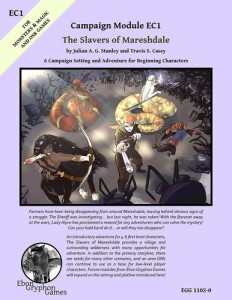 Farmers have been being disappearing from around Mareshdale, leaving behind obvious signs of a struggle. The Sheriff was investigating… but last night, he was taken! With the Baronet away at the wars, Lady Alyce has proclaimed a reward for any adventurers who can solve the mystery! Can your bold band do it… or will they too disappear?

Ai, tis the oldest adventure: do some investigating and then kill some stuff. What if you mashed up the goblin caves from Keep on the Borderlands with HarnManor and then chucked it into one of those older furry RPG’s? You’d get this adventure! HarnManor keeps it grounded, the fight it ultimately with goblins, and there’s a kind of Bakshi Wizards thing going on with the diversity of demihumans/monster present, including a Lamia! I assume that the system, Monsters & Magic (that I know fuck all about) brings the demihuman diversity element … as well as an interesting way to describe things. The adventure is long for what it is, at 45 pages, and a lot of that is …. Unfocused? But it DOES bring a lot of GOOD detail as well, as well as relatable situations.

There’s a village and the manor lord needs you to look into some disappearances. That’s been done about a zillion times before. What’s the pretext this time for Captain Courageous not minding his peasants? Except … I’ve often said I’m fond of the classic. They are classics for a reason. The hand wave that most designers give to them doesn’t do them justice and they become overused garbage. Until a decent one shows up, and this is a decent one. Sir Whathisname is a manor lord, meaning he doesn’t have a whole lot, and he’s off in the northern parts doing his manor duties. He left behind his wife, his steward, and three guardsmen. His pregnant wife. And his elderly, but capable, steward. This is going to be something the players can relate to. It’s not incompetence or ignorance this time, everyone is trying to do the right thing and the best the hand dealt to them. The Sheriff has just disappeared. But he was appointed by a judge serving a Baron and didn’t report his findings to the Lady … she’s not in his chain of command, he was over in a parallel one. Sadly, no beadle or villein in this adventure. I think you can see where I’m going with his … it’s got the surface treatment of being more realistic than most crap does, and because of that it’s more relatable.

There’s a small investigation element with clues at the various sites and various people about the village that know things, as well as advice on how to get a wayward party back on track. They don’t go to the inn and/or talk to the bouncer? Then have a different person they DO choose to talk to relate the information to them. Not a bad tactic if the goal is for everyone to have fun and give the players a feeling of accomplishment before taking them to the next part of the adventure. I might quibble on the details but the overall philosophy is a good one: if the investigation is a pretext/hook then make sure it can be completed so the party can move on to the next part.

There are a couple of adventure locations in addition to the goblin lair. One is a nice little ruins area with a decent dopplegangerish type encounter with children. It’s quite well done and sets up a scenario that, again, is frequently handwaved in other adventures. This is combined with something like 15 pages worth of wandering monsters. I’m not kidding. The vast majority are quite nice little vignettes. Lost children, angry mobs, wild animals and a few folklorish-like things.

The monsters, NPC’s and locations, all have these traits, actions, and sayings attached to them, or some combination anyway. This is a sentence or three that attempts to describe to the core of what is going on. I assume it’s a part of the Monsters & Magic system. Either way, it does a decent job of communicating the flavor and style of the location, monster, or NPC. One of the locations is a ravine, with the traits “treacherous footing, sharp rocks.” That does a decent job conjuring up for me the location and a way to run it. The monsters have “actions” like “flee when outnumbered” or “harass the good looking.” I assume this is influence from the narrative games? When I say ‘action” there’s no description of the action, or mechanics. It’s just a shorthand couple of words to describe the way the monster acts. NPC’s also have some similiar for a current goal and some mannerisms and phrases. “When you’ve lived as long as I have …” and “go ahead, I’ll catch up” and “unconsciously braids and unbraids his beard” are the ones for the old steward. VERY nice little touches and they communicate a lot in a few words.

The demihuman/monster circus of friendly NPC’s is easy enough to ignore/convert if your vibe isn’t so. There adventure actually includes a NPC roster at the very end, all on one page. I know! It’s a fucking miracle! Unfortunately it just lists the name, a two-ish word description like “goblin shamen” and a page number to find more, but, still, I’m in shock that someone has included a useful tool for a DM in an adventure! There’s also a little page on timelines; on what will happen if the party doesn’t do something. That’s a nice touch also and helps bring the adventure alive. Again, I wish more people did this.

On the downside the adventure loaded with text. The creatures all seem to have full stat blocks, taking up half a page each. The NPC’s and locations all get lengthy descriptions as well … which is pretty redundant given the EXCELLENT traits/actions/mannerisms. It also falls into the trap, in places, of being overly prescriptive in cause/effect actions. Evil dude will first do this and then this and then this and then this. Zzzzz. Wall of Text. The goblin lair gets the worst of the conversation description style, which is a bit disappointing.

It’s $7 on Drive/Now. I’d pay $7 for an adventure half this length … but maybe not for one as … conversational/wordy/unfocused as this one. I’m torn here because I really want to reward the relatable environment and interesting trait/action element, not to mention the fucking reference sheet. This one is SOOOO close. A highlighter and read through would fix most of it. It’s a decent basic adventure. It needs either a highlighter or a second edition that cuts A LOT of the redundant and uninspiring text.