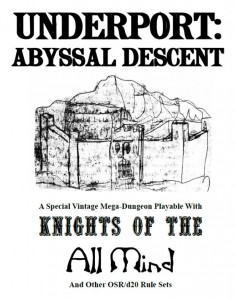 Edited by Matrox Lusch
Direbane Publishing
Knights of the All Mind
Level 1 … up to 17!

This hot mess was designed during the jr high/high school years, with a few refinements added in the later years to clean it up for publication. It hits, again and again, with the sort of noun/verb encounters that I think bring an adventure to life. It’s disconnected and random, as you would expect of a 1978 jr high adventure, and the modern editing added too much length in the form of extensive monster stat blocks. Presented as is, as a kind of historical object, it’s fairly interesting. Like Habitation of the Stone Giant Lord, it will suffer a bit in actual play. These historical objects are walking a fine line. Do you present the text in the original Middle English in order to remain true to what it is, or do you translate it to make it more accessible and usable? And if you do so, do you lose the focus and reason for it existing/being published in the first place? IE: Is this an adventure meant to be used or a interesting coffee table project?

The dungeon cross-section and style remind me a lot of Caverns of Thracia and I’m sure that’s no coincidence. Jr high minds get inspired easily and the author notes the inspiration of Judges Guild and Arduin source material.

I think my platonic adventure format is closer to Vampire Queen/Tegal Manor than it is 80’s or 90’s Dungeon Magazine/2e adventures. There’s this sweet spot of a sentence or two to describe a room/encounter that inspires the DM but makes the adventure easy to run at the table. A lot of that sweet spot has to do with a dynamic encounter, the kinds that features nouns and active verbs. I spoke to this, and compared, in my Hex Crawl review of Isle of the Unknown. Too many environments are static and boring. There’s nothing much interesting going on for the party to interact with. The verbs chosen to describe the room as passive instead of active.

This adventure does a great job bringing that noun verb action that sets up exciting and interesting things for the party to interact with. “A brownish-white oozy mass is in the center of this chamber, with a small twitching arm sticking out of it.” That’s an interesting encounter. There are two more sentences that go along with it. The second says it’s a black pudding and the third says on one finger of the arm is a ring of regeneration that will pulled into the pudding in 5 rounds. Arguably, this one encounter has done in two sentences, the first and last, what most adventures can’t seem to do in three or four paragraphs: set up something interesting for the party to interact with. The descriptors could be a little more … opulent, but even as written it’s a pretty solid evocative encounter. This is not an isolated incident. “A lizard man chief prepares to eat an extremely beautiful human female.” Or “The kobold chief is trying to convince one of his two sub-chiefs to go and tell the gnolls about the treasure offering.” Or “a giant badger having a snack of a hobgoblin” or “the lifeless body of a fighter with a stirge still attached being devoured by a piercer.” “16 giant hats busily munching away on 9 freshly killed hobgoblin bodies in this fungi-covered cave.” Notice how something is going on in each of those encounters? The creatures aren’t just sitting there, they are up to something.

That sort of thing is what makes encounters interesting. Just a sentence or two is all it takes. Not paragraph on paragraph describing the room. Not monsters just sitting around waiting to die. The dungeon seems ALIVE. Again, this text isn’t perfect; replacing some of the more common words with more creative and interesting ones would have taken the text to the next level. But, still, it’s a GREAT effort and I’d estimate at least 50% of the rooms have this sort of thing going on.

50% of the rooms in the first half anyway. As the adventure goes deeper into the dungeon the author got older and the writing style seems to have changed. The descriptions get both more verbose and less interesting. More descriptions of boring, uninteresting static things and fewer “action” scenes. “In this blood soaked room are several heavy oak and iron chairs fitted with manacles and head braces.” Great. A static description. And then a description of what the room is used for follows. Uh, I think we know what it’s used for?

As the rooms go deeper and deeper the room descriptions and entries get longer and longer. Some of this is the aforementioned crappier descriptions. Some of this is the format chosen for the monster stats. I’m looking at a page right now that has seven sentences of descriptive text and the rest of the page being taken up by monster and treasure stats. Book monsters and book treasure.

This thing is $5 on DRIVE/NOW. As an example of decent writing it’s worth $5. As a beer & pretzels megadungeon it’s worth $5 for the first couple of levels (completely unbalanced levels. I love it!) It’s also worth $5, IMO, to steal entire rooms and sections for your own dungeons. It’s formatted roughly, the maps are barely legible, the text is clogged with boring and verbose stat blocks, with no hooks or wandering monsters and only implied factions, etc. And the beginning few levels are an absolute delight.