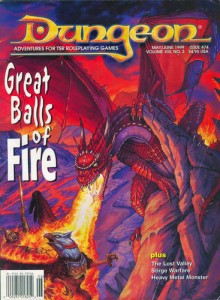 This being pirates, I was expecting a crapfest and was instead pleasantly surprised. Gnomes, submarines, pirates, and gunpowder seem custom made to set off my “Die in a fire” mentality, but, this does a lot right. It’s an investigation and assault. The town wandering encounters are nice and decently short, full of variety. There are several ways to reach the end game. Overview and summaries are present. There are lots of suggestions for names for ships and inns, without an overabundance of irrelevant detail. There IS some droning when it comes to certain areas. “ … On round 3 the druid casts entangle (blah blah blah). On round 4 the druid casts (blah blah blah” The droning descriptions get worse when you get to the base section, but the town section/investigation is quite nice, if a bit long and tope-filled.

Native Americans/First Peoples/Indians/Indigenous! Scene based! Oh boy! This seems to be the issue of surprises; once again what I would assume is a suck ass adventure is actually not too bad. The scenes could be construed more like events and there’s a nice little mythic elements of a nymph turning evil, etc, that I thought was quite inspiring and realistic. The plot is ok and decent enough, with a bad shamen (go figure!) and the first peoples needing some help with some monsters that can only be hit by magic. A little more depth to the village and personalities in it would have been nice, for you see there is no real reason for the party to hang around or anything for them to do while they wait for the next event. It’s more of a “just hanging out and then something happens” type of adventure, and the social element needed to support that sort of play isn’t really present. Still, not too shabby!

Yeah! I can get back to the hate! A loathsome tale in which each of the twenty-some hobgoblins has a name and they’ve trained stirge to respond to whistle commands. There’s a nice slyph encounter as well as an encounter with a rock (everyone should know by now that I like the folklore/fey stuff a disproportionate amount.) Hobgoblin leader Bob has set up an ambush for months now and given each of his soldiers a dose of Invisibility potion. Oh Boy! I quite enjoyed all of the side-encounters (mostly classic and/or folklore based) in this adventure and hated almost everything to do with the main adventure (mostly magical ren-faire based.)

There might be an adventure here, but it’s hard to find. It takes five of six pages to get the party into the adventure and on to some (token) griffons. One of the first encounters may be a dragon negotiation, which would be nice, but it’s SO overwrought with text that it’s hard to find the awesome. It’s basically a base assault, with the party coming in on griffons, and fire giants riding red dragons, and salamanders riding giant spiders on the rim of a volcano. You might think of this as “Hall of the Fire Giant King” if the hall were at the to of a volcano and there were more red dragons. It doesn’t have to be terrible, but it’s very hard to dig through the dross in this. A textbook case of full paragraph stat blocks and irrelevant text getting in the way of the adventure.

A side-trek. Weird vale, with some eerie stuff going on and then leucrotta attack. I like the weird locale vibe of this, it’s not very odious and doesn’t try to explain the mystery of some statues in the valley, a tree arch, or the crying that is heard (although its later taken advantage of by the leucrotta.) The valley allows provides a decent boon, in the form of an out of body experience, that can used by the DM to hook in other adventures or provide an oracle/sage like experience. I like the core idea here. I think this may be the first side-trek that I not only didn’t loathe but actually liked? The impact of NOT explaining the mystery is very strong.