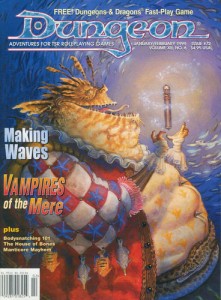 In a stunning turn of events … I’m now no longer wanting to gash out my own eyes when thinking about the next issue of Dungeon, but rather AM LOOKING FORWARD to it!

This is an interesting town adventure that is a little bit investigation and then has three of four linked areas underground to explore. Some zombies teleport into town. The party is hired to investigate, it leads to a hole in the ground, with caves, a ruined city, and an abandoned tower. There’s a little bit of several different genres present and the folks encountered seem more like real people than in many adventures. The little investigation is straightforward and involves encounters with people who have very human motivations. A cleric afraid to cast commune because of the answers he might get, or someone putting their life back together who has to deal with the sins of the past. There’s a little cave crawl that ends with a ruined city. inside are some mongrelman that you can ally with. Again, very real motivations and interesting things to talk to and interact with … not just a hack down. Overly wordy, could use better organization and maybe a little more color in places, but a nice variety of situations.

This adventure takes care of that pesky high level problem by setting most of it on the Elemental Plane of Water. There’s the usual page or so about spell and magic item impacts, although the adventure makes sure and point out that you will need to ensure the party has some +3 and +4 weapons so they will have +1 and +2 weapons for the special monsters they encounter. Flooded streets in a city lead to a wizards home and a gate to the plane of water and his (invaded) home there and the big bad, a marid. I don’t know, the planer stuff and water adventures always seemed like a pain in the ass to me. It doesn’t seem worth the effort to run/read a three column room description. I like the artwork for the marid though! (the cover) But that vibe doesn’t come through in the adventure.

Jesus H Fucking Christ. The DM talks for 45 minutes and then the players roll a die and then the DM talks for another 45 minutes. Nonsense act/scene based adventure with almost no content at all. Descend into valley. See/Fight/Talk gnolls. See/fight/Talk to gnoll masters. Ally maybe. big fight. Done. And here I thought Dungeon Magazine had improved.

Maybe the weakest so far in the Mere of Dead Men series. I love the premise of the series and the previous entries have been pretty good. This is a vampire hunt in the swamp, after a meeting with a group of female stargazers. Eventually the party finds out the headmistress is evil. The stargazer compound has some interesting people. They could be better organized into a table for use during play, but this is Dungeon in the 90’s, so, let’s be happy they have names and personalities and entries that are only one paragraph each. The swamp vampire is more like a set piece and the astronomy castle is pretty open ended. I wasn’t really inspired by the vampire, expect with an off-hand note that he lurks on the astronomy compound roof at night scratching at windows and whispering things to the people inside. That’s a great line that can lead to loads of fun. Most of the rest of the adventure doesn’t come close to that though. Putting a vampire in the swamp is not imaginative, nor is putting his grave in quicksand or putting some evil trees in. That’s just procedural and mechanistic. Scratching at windows at night and whispering love to the women inside … that’s imaginative and leads to creative play by the DM and players. One sentence.

A short little B&E job at an evil wizard’s home while he’s out of town. Nicely evil-lite (evil skeleton cats, evil skeleton dogs, evil? marionette with its mouth glued shut.) There’s no presumed one way in and a lot is left up to the players. Not overly burdened with real-aloud or text, especially where Dungeon is concerned. if you were running a city game then this would be a nice little locale for the party to hit if you worked it into whatever else you had going on. I was especially inspired by one the hooks: random NPC hires party to break in and loot it and leave evidence of another evil NPC having done the job. Imagine the party is contacted by some lame beggar “The crow barks at midnight!”