Shadowed Keep on the Borderlands 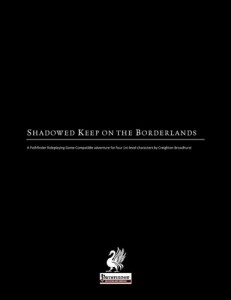 A ruined monument to folly and ego, the Shadowed Keep stands atop an isolated bluff deep in a mist-wreathed forest. Sacked by marauding goblins decades ago the place was thought abandoned, but shadows now creep among the forest’s great boles and footprints have appeared on the single, overgrown track leading to the keep. Travellers now disappear with alarming regularity from the nearby road and the local folk fear some slumbering evil has claimed the ruin as its own.

An adventure only an actuarial could love. A 96 page Raging Swan release means probably about 20 pages of content. Let’s see … eight pages of filler before the content actually starts … always a good sign. The last 25 pages are full of pre-gens and illustrations already seen elsewhere in the adventure? Oh expectations, you cause so many problems in my life, but also provide so many answers.

Bandits in a tower, goblins on one dungeon level and undead in another. One page per room and maybe thirty rooms total. This thing is a poster-child for bad modern design. The set up is a classic one. I love the classics. Classics can be great. This one offers very little new or great. It’s bland and completely over the top in its faux-organization. An empty room is four paragraphs. There’s lots of “This room was once used as BLAH but is now unrecognizable blah blah blah.” This is useless. It adds nothing to help you run the game. Worse, it helps to obfuscate the parts of the room description that you DO need to run the game. It becomes a wall of text that causes your eyes to glaze over.

96 pages and four lame ass hooks of one sentence each that rank right up there with “caravan guard” … *sigh*. “You’ve heard rumors of wealth”, “Bandits live there.” Those are not hooks. That’s not supporting the DM. “Rogers boys just hit Niko’s grain wagons” is a fucking hook. The intro DOES list one bit of good advice: a rival party of murder hobo’s can be used to put pressure on the party to get their asses in gear and generate some time pressure. A DC20 rumor check tells you the former owner of the keep was a famous adventurer and rumored to be very wealthy. Those are certainly words worth the electronic paper they are printed on. I guess the designer just gave up? The rumors are uninspired, raw and boring facts that every DM has seen a thousand times before. The wilderness wanderers have a little life, with wolf packs hitting small party members, and the like. But then no attention is paid to the dungeon wanderers; they are just stat blocks.

This thing is devoid of life. It’s devoid of color. The rooms, lengthy and taking up a page each, are boring. It’s all the usual things described in a boring way. There’s almost nothing in the adventure that inspires the DM and makes you want to run it, or gets you excited about running it. Why would you buy this? The highlight, by far, is a stone demon mouth you can stick your hand in.

It DOES do two or three good things, but that does NOT save it from being a boring shit-fest. The bandits have some decent personalities and there’s at least a small opportunity to interact with them. There’s a great timeline provided which supports the bandits in the tower skirmishing with the goblins in the dungeon. THAT’S supporting the DM. It provides opportunities for embellishment. Springboards for more interesting things to happen.

The surly half-orc cook hurls insults during combat. In spite of the kitchen having nothing much of note in it, besides a hot stew pot, and in spite of the room description being a page long, we get no insults to hurl at the players.

1 Response to Shadowed Keep on the Borderlands