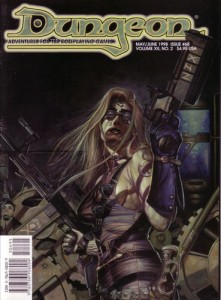 OMG! Why am I writing this instead of playing Fallout!

An adventure with no redeeming qualities. A sculptor is turning people into statues. (Weird, never seen that one before.) He’s aided by wererats and jermaine. He thinks he’s doing good. The party is hired as guards for an art event, then they randomly find a woman looking for her missing husband. Rumors abound, a lot related to the sculptor. Telegraph much? This is akin to the notes you jot down in 10 minutes to run your game Friday night, but over ten or twelve pages. No interesting content at all. Wererates. Wow.

I suck at SciFi/Space, so no review from me for this space station tickery adventure.

Side-Trek Uh, it’s an tree cuttinging engineering mini-game. A young boy summons the party to help free his uncle, trapped under a tree. Goblins and wolves are nearby and attack if the party takes too long. There are a wide variety of options offered for freeing the guy, which is good. None of them mention time, which is bad. The adventure makes a point of the timeline and then gimps the timing aspect? Hmmmm … Nice imagery of snow in a fir forest, but it takes a lot of words to get there.

Oh … so close. The hook in this is finding a locket in a cave. The cave also some dead bodies in it, being gnawed upon by spiders. Checking things out in the nearby town discovers a kidnapped woman, the owner of the locket. Nosing about discovers some leads to an old keep, and ye old assault then begins. This does several things quite well. The hook, a discovered item, is nice. The information in town is organized, with “here’s this person and heres what they know”, and it’s fairly easy to see how one lead can point out another person to seek out. There’s a good encounter near the keep, some attention paid to decent wandering and town encounters, and an order of battle for how the baddies in the keep react. It’s a bit … I don’t know. Dry isn’t the right word. It’s a bit flat. The characters, town, and so on are all pretty one-dimensional and lack the flavor that makes for great NPC’s. I’ll chuck this in to the “organized well” category and also the “lacks imagination” category that is oh so rare.

Side-Trek. A cursed magic item: a genie map that has a guy in it instead of a genie. He tries to trick someone into taking his place. Nice idea for a cursed object, if done in three sentences.

This looks a lot like one of the modern D&D 5E adventures published by WOTC, at least in style. It’s a rough outline of an adventure with oddly specific details thrown in. A blind woman has a treasure map. If you wait a month and find some standing stones you can get a crown that lets you turn some stones into trolls … with their bags of gold. There are some centaurs nearby that know where the standing stones are. They hate dwarves. That’s the adventure. It’s all very general, almost like someone jotted some notes down on a page: “centaurs nearby know the location of the stone but hate dwarves.” And then centaur stats and names. Very odd. It’s more of a description of a potential plot outline then it is an adventure.

Imaginative but not evocative. Some dwarves hire you to find out what’s going on in the forest. It’s full of plant monsters created by a now-evil treant that was corrupted by a now-dead wizard in his now-abandoned mansion in the forest. The integration of the monsters into the adventure is well down, they fit. There’s a nice NPC in the form of a were-spider girl. The wizards mansions is nice and wondrous in the non-standard/non-book way that I like, with some great unique items, like a talking door plaque, that the party can grab. It’s D&D as if you hadn’t read all of the D&D books and adventures from the last 30 years. The descriptions are not quite up to snuff and are a bit boring, but the concepts behind them are good.