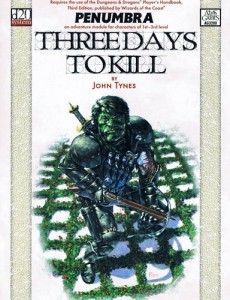 Deeptown lies in the shadows of mountains, a town where anything is for sale if you can only meet the price. But in the wild surrounding valleys of the Deeps, it’s the bandits who make the darkest deals–and their ambition comes at a cost far greater than the contents of any wayward caravan. You and your team have just been handed a new job: disrupt a meeting between a bandit lord and his mysterious new allies. At a remote mountain villa, you will strike hard and fast and leave terror in your wake. They give you the tools. You provide the talent. Survive, and you’ll be well rewarded. Fail, and you’ll pay the price. You’ve got three days to raise some hell.

Sometimes I read forum threads where various folks say “Blah blah blah adventure is great!” I jot down the names and grab them when I stumble across them in a garage sale. Such is the case for Three Days to Kill. I can see why folks like this. In the land of generic genericism this adventure has some colour. The colour is scattered and not consistent. Portions of the adventure left me wanting to know more, in a good way. Excited about what I was reading. The main portion of the adventure is a raid on a ruined manor. That portion is relatively short compared to the page count in the rest of the adventure. This adventure covers all of the bases. It doesn’t treat the introduction or the starting village as a second-class part of the adventure. This recognition that the fun takes places EVERYWHERE in D&D is an important one. The journey is the Destination, and all of that jazz. I just wish it were a little more consistent in it’s color, in a bad way, and wish there was A LOT more, in a very good way.

The party is hired, in mysterious circumstances, to go raid a manor where an important meeting is taking place, disrupting the potential alliance being formed. Pretty simple, even though that particular task is not one that is usually seen. There’s this underlying sense of the unsavory that appeals to me. Everything about the adventure, from the village to the hook to the raid, is just a LITTLE bit not kosher. After experiencing adventure after adventure where the goal is to Save the World or Stop Evil, it’s refreshing to see an adventure in which things are a little more mercenary. There’s this sense that something’s not on the up and up … and yet nothing you can point your finger at to say “this is wrong!” It’s pretty skillfully done; no big complex setups, just relatable motivations.

There’s a trade pass through the mountains with a small town in the middle. Bandits abound in the mountains on both sides. The town in the center is a bit unsavory … perhaps a bit … libertarian? As the adventure notes, can you call it bribery and corruption when it’s an integrated way of life and just the way things work here? The town lives in the shadow of the mountains, literally and figuratively. Even this appeals to me. The sort of integrated whole of the environment leaves me wanting to know more about the place. It’s interesting. It’s simple. It’s described in the way that makes your mind race and want to run a game or campaign there. The town backgrounds descriptions are short and punchy yet the page count is rather high. This is because large sections are taken up with supporting sidebars. An NPC stats, or a map, or something like that. Interesting descriptions with easy to find information … that’s a plus.

The first section of the book has these little background snippets on the area, the town, the bandits lords, and the temples in town. Maybe three of four paragraphs on each with some generic sidebar information. (I said the sidebar/supporting information was easy to find, I didn’t say it added much content. 🙂 It’s very strong of 10,000 flavor and atmosphere.

The second portion of the adventure focuses in on a specific event: the Festival of Plenty going on when the party arrives. Again, portions of this are very colorful. An effluent pit and a nice little passion play are the highlights. They are both very well done and are great things to build off of. And then there are the other suggested events. “A drunk ½ orc picks a fight with a PC elf or halfling.” My my my. I wonder how long it took to come up with THAT idea? A dwarf wrestles all comers with a 1gp purse.” Again, not too much there. This kind of boring and uninteresting dreck is jarring in comparison to the better parts. Consistently the 10,000 foot stuff is very good, communicating colour and flavor perfectly. And consistently the specific portions, while organized quite well, are boring as hell. The NPC motivations are done well. The adventure doesn’t waste space on nonsense descriptions. But the specifics are just not interesting at all. The play and the drinking game are standout exceptions. “Ill kill you!” is a Baron Munchausen like drinking game that should delight the players.

After getting hired by some shady guys in masks the party goes on to raid the manor house. In high school I used to play Danger International. Every adventure ended with a raid on the bad guys base. We’d plan our assault, come up with some goofy idea, and then execute it. That’s what’s going on here. There are a wide variety of magic items to assist in the planning and execution that range from the cool to the lame. “Flare Pebbles” are lame little flash bangs. A devil eye floating in a glass jar that always looks towards the nearest/strongest presence of evil is pretty cool. There’s also a glass orb you can look through,kind of like binoculars. Glass orbs are boring, but that’s trivial to change to an eyeball also. Bryce Pro Tip: Organic magic items are always cooler. 🙂 The description of the manor is PERFECT. This isn’t an exploration mission. The room descriptions are about two sentences each and focus on what’s important. An oil lamp, or who hangs out there. The room descriptions match the purpose of the adventure. This section is quite short, and it really doesn’t need to be long. It may be missing an order of battle; what the various groups inside do when attacked. Other than that it recognizes what it needs to do and it does it. Good Job.

Let me note that the adventure then becomes SPECTACULAR. Chaos. Pure Chaos. While the party is attacking one faction turns on a magic mirror. And things start coming through. Who end up not allying with anyone. This makes faction number four (alliance side a, alliance side b, the party, the mirror) and THEN some orcs show up. Chaos! Wonderful wonderful chaos! The adventure is, though, missing a callback.. The presence of orcs in the area should have been a rumor, or maybe some bodies with missing ears or something. Something to trigger the party into saying “Oh shit! the orcs we forgot about!” (Also, the rumor table sucks.) Anyway, this is a great tactic to up the ante. Instead of dictating some nonsense set piece bullshit the adventure instead provides the elements to up tension. This is a great way to make things memorable without the usual set piece nonsense that modern adventures seem to rely upon. (WOTC: You suk.)

The PDF is $5 at rpgnow. I really like the background in this. I’d LUV to know more about the region/town/temples. If every adventure were at least this good I’d be a happy man and probably not running tenfootpole. It’s a long way from perfect, especially as it gets to the specifics, but it is VERY inspirational. It’s the kind of thing you WANT to run. And those are few and far between.

5 Responses to Three Days to Kill